Names of HYIP and their Meaning 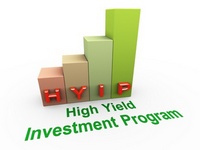 By Eric Marriam
Strategy and tactics of HYIP investing. The use of abbreviations in the title of financial institutions. Significance and meaning of phrases
Sponsored Links
When you meet person, you certainly ask his name first of all. And the name - it's the first thing you hear, the first information about the person. Of course, perforce you have a certain opinion about him, reasoning from his name. Maybe that's the name of some relative of yours, or some offender, or your aunt, who bored you to death in childhood. All this leaves the mark on further communication, so we decided - the name of HYIP - is the same as the person's name!

When you meet person, you certainly ask his name first of all. And the name - it's the first thing you hear, the first information about the person. Of course, perforce you have a certain opinion about him, reasoning from his name. Maybe that's the name of some relative of yours, or some offender, or your aunt, who bored you to death in childhood. All this leaves the mark on further communication, so we decided - the name of HYIP - is the same as the person's name!

Moreover, if a person won't assume the right to be superstitious as regards to some specific name (well, it would be somehow not nice to cross oneself, or avoid communicating to a person called Steve or Josefina), then in the world of HYIP such prejudices are in vogue. And... for the sake of truth we must admit that sometimes they realize, because often the author of the program wants to express the main advantage of the program in its name, and that becomes the reason of a collapse.

Such regularity developed due to objective reasons of HYIP development. We all understand that administration actually have no many variants to choose from. First of all, the main and the most circumstantial variant - using four sore letters: HYIP. Nowhere without them... to be exact one can do without them, but in such a way it becomes clear what it is all about.

Tell me, everything is clear for you. Where is the person from, what is he (and there's a strong association in the brains of a genuine investor: isn't it a SCAM?) Maybe you have already understood that his parents went mad on online investments. :) That's a joke. In such a way, TOP position in our list is the word HYIP (abbreviation of course, to be exact).

Then the words FOREX, GOLD, FUND and different forms of the word INVESTMENTS are used equally. In fact you should know why these words are used more often than others. Programs that work on FOREX try to call themselves like that, and programs that buy or sell oil, more often put this word into their names.

Everything is quite simple. You also know that the greatest value fro investments is gold - the price for it changes often, it's comparatively high and predictable. As the result - this word becomes the part of the name of the program.

Besides, the main e-currency for HYIP transactions is - e-gold, which is inseparably connected with gold. Concerning "investments", "investment", and simply "invest", obviously these words are not worth talking about; everyone knows what they mean, and why programs given are called like that and nothing else. We are all from the investment world.

Large group of names make up programs of different traders, experts etc. It's usual. Actually, original name of a program will hardly save you from being scammed, but it will definitely be better than some old, plain name. All because everything here is according to the principle "the way you call a ship"...

As for the "effect" of the names, we can say the following. First of all, investors have a number of strong NEGATIVE associations with some names. They won't just invest to the program, if it's called like that. Moreover, if in the consequences it turns out that it's a scam, the rule proves to be true.

Unfortunately we have no exact statistics, though while preparing this article we carried out small investigation that confirmed these rules. So, one of the most dangerous for investors are programs, having the word BANK in the name. The thing is that notions "BANK" and "HYIP" are totally incompatible, that's why such a name has the purpose just to win investors' favor, to make them sure they are safe, connecting their program with banks in their consciousness.

Rabbit, known to everyone usually comments on the messages, saying about such programs collapse easily: "the word BANK in the name - so it's a SCAM".

The second widespread variation on this topic is the names, based on the payout method, they realize. DAILY, WEEKLY, MONTHLY - like that. And here the word "hourly" is the most disregarded by investors.

Actually now there are several programs that realize payouts hourly and having the word "hourly" in their names that work honestly, brining revenues, though more often such programs disappear right after the start of their work, and there's nothing left to establish another confirmation. More likely it has to do with objective complexity, which is - to pay hourly is more difficult than to pay daily or weekly.

And so we are finishing our brief review of the HJYIP names and their meaning. Hope it was interesting. If you know something to share with on this topic, we are always open for communication with you. Good luck and... pay attention to names, they can mean a lot.