Seven Most Common Errors of Traders 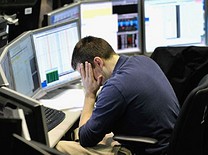 By Nicole Berger
The article telling investors about the most common mistakes made by newbie traders and investors.
Sponsored Links
The enormous number of traders is constantly entrapped in the same way. To avoid them is not too complicated, if we use simple rules constantly: from day trading to the position trading. Each unlucky person and practically any deal beginner on the market make almost identical errors. The first category makes them just because it cannot simply be otherwise. The second one is the result of their inexperience.

But in any case, the basis is that everybody thinks in a standard way in the precise correspondence with the psychological manifestations of the behaviour of crowd. We will not find the reasons for this discussing the theme of the effectiveness of market. Let us discuss the basic errors of investors and traders, which show most vividly and can be avoid for ensuring a sharp increase in the profitableness of trade.

Error 1. Purchase at the summit.

A great number of traders enter into the market in the moment when it is already time to leave the market independently of that fact on what scale they deal. In the terms of Elliott's wave theory, this usually occurs at the moment of the end of the 3rd wave or the 5th one.

Although there is still the chance for the taking of profit from further increase in the market, the probability of decrease is already very high at these moments usually. As the result, the trader enjoys the profitableness of transaction short time but he sees very soon that the reduction in the quotations leads to the loss.

If this happens on the outcome of the 3rd ascending wave, the trader will be tortured because the price begins to move according to the laws of the 4th wave: the position constantly changes passing that into the profit, that into the loss. When the trader bothers this he leaves with the loss or small gain. But later he sees with the consternation that the price goes to the new summits and his transaction could give good profitableness.

But if the commercial position is created in the end of the 5th ascending wave, the business is even worth, namely, the price tendency can change at any moment and not return to the entrance point in the foreseeable future.

Perhaps, this version is the poorest of all existing ones, although the understanding begins rapidly but the price of a lesson proves to be very high frequently. Nevertheless, events with all unlucky persons and enormous number of trade novices are developed according to this scenario.

How to avoid the so extended error - purchase at the summit? Answer is contained in several simple rules:

â€¢ Never buy with the growing volume if prices are located in the upper part of the market and there are no important reasons for further increase in the prices.
â€¢ Buy on the growing market supported by volume only if you observe the penetration of resistance level.
â€¢ Always remember: sale stands against your purchase where the trader leaves the long transaction or enters into the short position.

Finally, the fundamental rule for the summit is the following: the volume and prices describe unidirectional trajectories.

Error 2. Sale in the base

The trap "sale in the base" catches not smaller number of traders if we compare with the situation "purchase at the summit". It is however strange but this case is reflecting with that dismantled above, namely, the same increased volume in combination with the strongly falling prices.

Again if we yield to temptation to lean on the dogma about the supporting trend volume in our analysis or prove to be subjected to the pulse of greediness, seeing how other people earn on a drop in the market, we surely lose.

The basic commercial public (series investors, traders and a certain number of managers of investment trusts), who do not know the set of instruments, which are commercially available, is subjected to emotions and feeds panicky market by itself. As a rule, the panicky market has a pointed cavity (the type of letter "V") supported by volume.

The sellers in this situation, occupying short positions on the trend, will encounter with the turn of prices very soon, and they will be averaged or shut with the loss. Those, who sell getting rid from the long positions will almost immediately regret about their act by observing the rapid restoration of market.

How to avoid this error? There are also the rules, which are similar to the previously presented ones:
â€¢ Never sell with the growing volume if prices are located in the lower part of the market, especially when all levels of support are passed and there are no important reasons for further drop in the prices.
â€¢ Sell on the descending market, supported by volume, only if you observe the penetration of the level of support. Always remember: the purchase stands against your sale where the trader leaves the short transaction or enters into the long position.

Error 3. Sale of the leaders of increase

Very frequently, the trader occupies a short position if he sees that the object of his attention (the action or futures) showed an intensive increase in the prices and made the reverse recoil after that. The enormous number of the players on the market assumes that this is a signal about the future attack of bears.

To their enormous disappointment, prices are fixed above soon very easily after a certain period of calm and motion in the price range. Certainly, the trade during the correction is a good strategy, which frequently brings good incomes to traders, accurately determined the possible behaviour of market.

But it cannot be forgotten that trade is conducted against the existing trend. The conclusion is that taking a position according to the correction downward is the promising occupation only for the version of a good price recovery.

But in the reality the leaders of increase, stopping their price motion, make this for the only purpose of "to be defended" to go above. Their correction can occur not as the result of price motion downward but "to be worked out" due to the lateral trend. Undoubtedly, the turns of the leaders of increase occur but to stop their motion is not very simple, therefore there are some useful and helpful rules:

â€¢ Do not occupy short positions according to the leaders of increase, hoping for the strong correction because most likely it will prove to be not so significant
â€¢ Deal with the application of strategies calculated for the breakthrough.
â€¢ Longer lateral trend lasts after strong price splash, so there are more chances in the market to go above upward after breaking through resistance of the upper edge of range.

Error 4. The purchase of the leaders of increase

To buy the recent leaders of increase is the same inadvertence as their sale. The interpretation of the behaviour of the leaders of increase is most frequently observed on the market. Prices do not can grow eternally, but there is no limit to this almost, therefore only what they require before the continuation of upward motion is â€œto be defendedâ€.

But the problem is that this period can be sufficiently long extended to the weeks, therefore the effect from taking a long position will not be very large even if purchase was successful and trade always is located in the profitable zone.

Rules for avoiding of theerror 4are simple as never:
â€¢ Never hurry to engage the position of the leader of increase in the direction of trend if you see slowing of movement and recoil.
â€¢ Use stop warrants designed for the performance after the penetration of levels resistances.
â€¢ Buy with the limit warrant not earlier than the third impact about the support prevailing up to the current moment.

Error 5. The purchase of the leaders of drop

The purchase of the leaders of drop is smooth by nature sale of the leaders of increase. What can we expect from the shares or futures locating in the descending trend? Nothing except small correction. Often it is converted simply into the lateral trend, after prices continue to move downward. Again, to be successful in the trade during the correction is necessary to purchase by good support.

Therefore rules are following:
â€¢ Do not occupy long positions of the leaders of drop hoping for the strong correction because long positions will hardly be significant.
â€¢ Deal with the application of strategies calculated for the breakthrough.
â€¢ Longer lasts lateral of trend after strong price drop, there are more chances in the market to go below after breaking through support along the bottom edge of range.

Error 6. Sale of the leaders of drop

Again, this error is smooth to theerror 4.It is not too easy to stop the leaders of drop because the market definitely has inertia, and even if it reached its objective bottom the residual motive power of bearish tendency is capable â€œof reapingâ€ prices still below. The inaccuracy of the solution consists in the simple ineffectiveness of capital utilization. Lateral range can last for long time. The most critical point is the third impact about the base.

There are some rules to avoid theerror 6:
â€¢ Never hurry to occupy a position of the leader of drop in the direction of trend if you see slowing of movement and restoration of prices.
â€¢ Use stop warrants calculated for taking a short position after the penetration of the levels of support.
â€¢ Sell with the limit warrant not earlier than the third impact about the resistance prevailing up to the current moment.

Error 7. Purchase of the past leaders of recently fallen increase

This error is the consequence of greediness of a trade novice. There is no secret that the trade novice frequently comes into the market after hearing about the super profits which were obtained from the phenomenal increase Internet companies.

After being introduced to the graphic analysis, this trader looks at such actions, as YHOO, AMZN, AMCC, JNPR, WCOM, LU, QCOM. Therefore it is obvious that the trade novice sees super profit. These sensations support a steady myth about â€œthe prices always returnâ€.

There are some rules to avoid theerror 7:
â€¢ Never hurry to buy shares located in favour and now strongly fallen to those prices from where they began to grow.
â€¢ Examine shares only as short term trade.
â€¢ Buy with the limit warrant after overcoming of the nearest resistance and fastening of prices above it.

Undoubtedly, it is always necessary to remember about the stop warrant closing the transaction in the case of failure, if we do not use other tools ensuring the regulation of risk. It is necessary to use them more widely because on the market there are many mechanisms, among which options are most productive. There are a lot of options and they are well sold out.