How to Buy Bitcoins in Bitcoin ATM

by Nicole Berger <[email protected]>
Updated: 03/12/2015 13:35
Newsline export for WebMasters
Hyip Monitor
Knowing how to buy Bitcoins in Bitcoin ATM is a useful skill, especially taking into account the fact this cryptocurrency is getting far more and mroe popular. Read the article below and find out about the progress of Bitcoin ATM industry within last year. Learn about the specifications of carious Bitcoin ATMs and verification required to be passed through in order to buy bitcoins. Learn this and much more reading the article below.

As of today, around 82K companies accept Bitcoins in the world. That is more than twice more than the number of those the same time last year. As the number of companies that accept Bitcoins grow, the necessity to buy Bitcoins easily grows proportionally. That is why the number of Bitcoin ATMs has been growing exponentially during the previous 24 months. At the beginning of 2014, all around the globe there were only four(!) working Bitcoin ATMs. Now there are 350 of them... quite a difference i should say. Nearly half of them are installed on the territory of Northern America (105 are in the US, 60 in Canada and 4 in Mexico).

Bitcoin ATMs are not only concentrated in the big cities like New York or San Francisco. Both of these cities have only six working ATMs each, while the same number have been installed in Kansas-City. 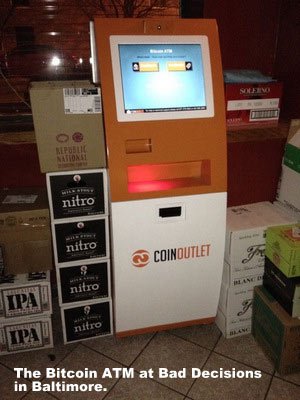 You can also find Bitcoin ATMs in Birmingham, Alabama and in Boyce, Idaho. These machines started to appear in bars, pubs, restaurants and trade centres all around America.

There is one Bitcoin ATM installed in Baltimore in the historical place Fells Point in the bar called Bad Decision. And people use it. The owner of the bar says he was not sure it will enjoy popularity when he decided to install it. Now there are about three transactions processed through this ATM daily. As the bar owner says it was the Baltimore Bitcoin Group, gathering in his bar monthly, who insisted on installing the ATM. Most of those who take advantage of this ATM are regular users. Some transactions even reach up to $1000.

Also the bar accepts Bitcoins as the payment method for drinks and food. And, unlike other companies, which convert bitcoins received, Bad Decisions keep the assets stored in crypto-currency. By now the owner has about three bitcoins, which is around $800 according to the current rate.

That is just a single example showing that Bitcoin ecosystem irradicates. However, people need to know using Bitcoin ATM differs from using the traditional bank ATM to some extent. With the purpose to explain this difference Money Morning has prepared the manual on how to obtain bitcoins with the help of Bitcoin ATM.

Not Every Bitcoin ATM is the Same!

The first difficulty every willing to buy bitcoins may face is the location of the ATM itself. Traditional ATMs are everywhere. There are more than 425K of them in the US only. In search of a Bitcoin ATM one should use the interactive map.

As of today the best is Coin ATM Radar. With its help you will learn the exact address and working hours of the nearest Bitcoin ATM from your location.

Buying bitcoins is the following step. And that is not that easy, as you might be thinking. The difficulties rise when one discovers there is no card issued buy any financial institution, which can be used in Bitcoin ATM. That is why the process more often includes some extra verification.

Which is worse Bitcoin ATMs are not standardized. More than 5 companies are now involved in developing and building the Bitcoin ATMs.

Apart from the verification process, which needs to be processed, you need to have a Bitcoin address, so that the ATM could know, where to transfer the bitcoins you purchased. Smartphone with the wallet installed simplifies this process. Otherwise you need the QR code with the Bitcoin address encrypted there and printed on a piece of paper. 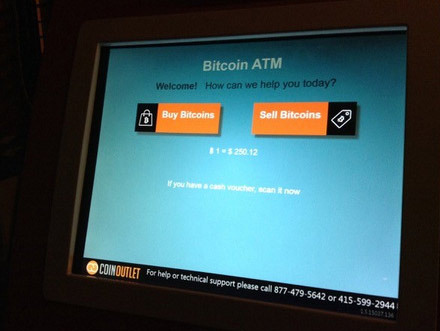 Some model specifications of the ATMs, produced by Lamassu for instance, Skyhook and CoinOutlet shown on the image above interact with customers in such an easy manner as the one described above. Other companies add various personal identity verifications, which can be considered to be annoying by some customers.

For example BitAccess ATMs require the mobile phone number, where ATM sends the verification code, which further on should be typed in on the ATM touch screen.

The ATMs made by Genesis Coin use the same verification. Apart from that you would have to accept your fingerprint being scanned.

The Robocoin topped everyone else. At first ATM needs to create the account, which includes the scheme given above including your phone number and the verification code. Afterwards one should choose the pin-code. The next step is scanning your identity card with the photo included, and also your live picture for comparison. Then you need to wait for a couple of minutes till the system creates and verifies your account.

As for the process of buying bitcoins in the ATMs made by this company looks like that: you enter the phone number and pin-code. Then you scan your entire five. If the identity is confirmed, the system lets you to buy bitcoins.

Well, of course, experience and the market trends will definitely clear the air. In a while it will become evident how complex the process of buying bitcoins should be. Until then, answering the question "How to buy bitcoins in BitcoinATM?" looks not a simple task at all.

Compounding VS Non-Compounding Get started
How to do Due Diligence? Steps and Myths High Yield FAQ
Hyip Reinvestment to Lose or to Win Strategy
Online Casino: is there ANY Chance to Win? High Yield FAQ
The Role of Advertising in HYIP Publicism
HYIP admin and HYIP operators HYIP Wiki
MMM as the Largest Russian Financial Pyramid Hyip history
Superstitions and Intuition in the Life of Investor Philosophy