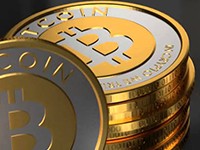 The leading bitcoin industry resource online CoinDesk published the new report, giving the detailed overview of the main events and trends of the year 2015, including some forecasts for the year 2016.

The report called 'State of Bitcoin and Blockchain 2016' includes 124 slides and offers great amount of actual information, analyzing which can take pretty much of time. Here below we are offering the key points of this report, which, due to the large number of facts, can be skipped by readers.

Accepting Bitcoin as the routine use currency hasn't possibly become maximum popular, however lots of things indicate things are developing in this very direction.

Apart from that the number of Bitcoin ATMs installed worldwide has also increased nearly twice from 342 to 536. The number of transactions processed weekly increased by 50%.

Perhaps these numbers don't mean some sort of enormous growth, however at the least they certificate the fact Bitcoin is not dead at all, as many observers could forecast before.

During the year 2015, large number of alternative cryptocurrencies (so-called altcoins) have actually gone into liquidation. Certainly, quite a number of altcoins are still showing stability and periodical index growth, however more than 400 coins don't actually have any market capitalization, which is considered to be on of the key factors of the crypto assets.

The market capitalization of Litecoin, Ripple and Ethereum remains on the same level as it was at the end of 2015, which speaks of the ongoing interest in using them as alternative public blockchains. Along with that the capitalization of such coins as Dogecoin, Peercoin and Dash has even doubled, still for now noone can tell for sure, whether it's been the result of traders or real crypto customers activity.

As the Bitcoin popularity grows and as the result the transaction number increases, the current volume won't be enough. Ways to solve this problem in the most effective and safe way have already been the biggest point at issue since Bitcoin industry emerged. Several solutions are offered in this aspect, such as Bitcoin Classic increasing the block size from 1Mb to 2 and Segregated Witness, emphasizing the network optimization.

This story has also raised a blast of negative publications about Bitcoin in mainstream titles and, fortunately, the community has global understanding of the fact, the problem needs to be solved as soon as possible. The consensus of opinions will make the cruptocurrency more adapted for the future and will become the effective response to the critics.

Another question, which is obviously going to harass the industry as it will move forward, is its privacy (lack of privacy to be exact), not secure by actually transparent public blockchains. This problem is actual both for the companies and physical persons, being lukewarm concerning publishing personal data in databases, which are absolutely open for access by governmental authorities, competitors and even family members.

That is actually the reason why we should expect more efforts taken to create the solutions, which will conserve the advantages of blockchain technology and solve the customers privacy issue.

Depending on the source Bitcoin has either shown significant volatility growth or, on the contrary, its significant decrease. For instance the Coinbase gives evidence the volatility decreased by 21% in 2015, publishing the numbers of 30-days peak Bitcoin price indexes.

However if we have a look at the percentage ratio of the gaps between the highest and the lowest points, the volatility compared to the end of 2014 increased by 96%. The volatility growth in its turn led to more activity on stock exchanges: in the last quarter of 2015 the stock market volumes achieved the year maximum, increased by four times compared to the start of the year. 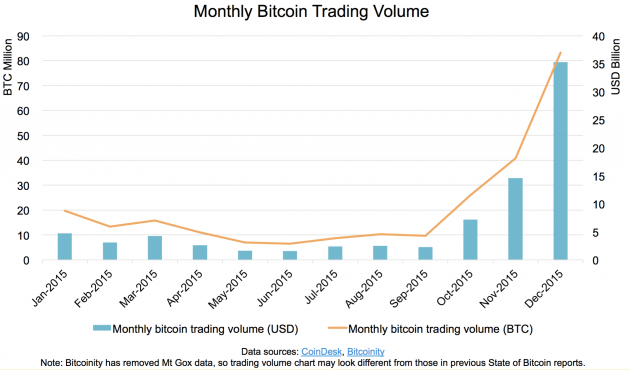 The increased activity on the stock market also concurred with the Bitcoin price growth, which reached its year maximum on December 11.

Miners, i.e. independent customers, using the specialized equipment for processing transactions and doing that supporting the work of the entire bitcoin network is an essential part of the industry. Statistics shows, within last year mining pools (groups of miners) consolidated and finally the number of pools decreased, though their hash rate powers increased consequently. The graphs below show strengthening of Antpool and F2Pool - growth from 2% to 50% during the year 2015. As of now each of those pools accounts 25% of the total hash rate power of the entire Bitcoin network. At the same time other pools, such as GHash.IO ceased to exist, not being able to take up the pressure of the long period, during which the cryptocurrency price rate was low.

Such consolidation can still be a matter of concern, for decentralization is an essential part of Bitcoin philosophy. Today there are statements warning against consolidating the engines by large companies, which may actually lead to centralization.

Along with that percentage ratio of anonymous pools decreased significantly as well from 11% to 1%, which is also an important aspect of the network functioning: in case any of anonymous pools could own the large part of hash rate engines (milestone is 51%), this could endanger the entire network security.