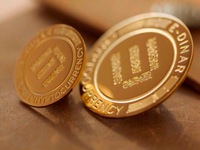 The new generation e-currency E-Dinar Coin (ecological decentralized revolution, EDR) has been given to works worldwide. More than 180K customers have already become owners of the cryptocurrency and invested around $10 mln. into its development. E-Dinar developers have made a thorough and complete market research and considered all drawbacks of the cryptocurrencies that currently exist.

The developers of EDR call the project as the result of age-old money evolution and the tool, which is supposed to let people get rid of old fashioned money rules and inflation risks. E-Dinar Coin works on the basis of Blockchain technology. The new cryptocurrency has been available last week. It can be purchased on the currency exchangers alcurex.com and exrates.me. Within two days the price on the cryptocurrency grew more than twice and is currently traded at the price of 1.69 BTC per 1 EDR.

The number of news e-coins to be issued is planned to reach the record amount of $999T. The price of the new currency may eventually reach $1K. As anyone can guess from the name, E-Dinar Coin will be involved in ecology problems, fight with water, air pollution and deforestation. Some investments to the projects related are planned to be made as well.