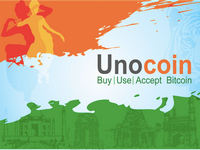 Indian bitcoin company Unocoin has launched an iOS and Android app allowing customers to buy, sell, send, receive and store the cryptocurrency from any remote device. Its users will be the first in India to have these capabilities and real-time access to prices.

A mobile-friendly market with its own currency issues is ripe for such a development, Unocoin cofounder and CMO Abhinand Kaseti said. He alsor added that currently more than 1 billion Indians are using smartphones with one third of this number being constantly connected to the internet. And this trend is expected to go up by 56 percent each year. That is why it is now the best time to create some interface, which would bring customer satisfaction, easy navigation and user simplicity to the next level to be able to provide an even more convenient way for users to access and manage their digital currency portfolio when a home or work computer is out of reach.

The new app continues a busy fall for Unocoin. They raised $1.5 million in October and recently implemented a new API which includes a buy and sell pairing for BTC/INR, mobile direct-to-home satellite program recharge and systematic investment plan access. Its POS app is available at both the App and Play stores and has some unique features, being secured with TouchID for iOS devices and password access for Android devices. Selling and buying bitcoin can be done with one touch. The dashboard displays the user's BTC wallet with the option to send and request bitcoin, and the INR wallet, with the option to add and withdraw Indian Rupees.The Unocoin wallet app requires iOS 7.0 or later for iPhone, iPad and iTouch users, and Jelly Bean or later for Android users.