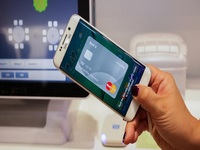 The Samsung Pay mobile payment service is in action to launch in another country - India. Currently Samsung Pay is being tested in India and will be launched in the first half of the year 2017, as reported in SamMobile. Let us remind you, in November 2016, Indian government recall from circulation the currency notes of 500 (7 USD) and 1000 (14 USD) rupees with the purpose of developing electronic payments' market.

At the moment Samsung Pay is available in Australia, Brazil, Canada, China, Russia, Singapore, South Korea, Spain and the USA. LEt me also remind you, earlier Samsung planned to launch its mobile payment service in GB by the end of 2016, however the decision was taken to postpone the launch for the year 2017, since the negotiations with local banks are still in progress. The company leaves open the possibility for the launch delay in India as well for the same reason, however it hopes the launch of the new smartphone Galaxy S8 will coincide with launching Samsung Pay in one more country.