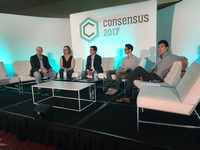 The global blockchain conference Consensus 2017 is being held since May 22 till May 24 in New York. On the first days there happened such important events as presenting the Prism crypto exchange, the Citigroup Inc. blockchain platform for the capital market and NASDAQ has been announced. Also in terms of partnership of Digital Currency Group, IBM and Mastercard the new initiative called DCG Connect has been announced as well.

The conference started with the news saying JP Morgan started cooperation with Zcash on Blockchain Security. In this context Zcash price jumped from 120 to 270 USD, though rolled back further to 215 USD. The most imminent conference announcement is the EOS project. The co-founder of the Bitshares and Steam projects Daniel Latimer astonished the visitors with the slide showing information that Bitshares and Steam are being used more that Bitcoin and Ethereum taken together.

Speaking about EOS, the OS is meant for blockchain applications. During its presentation there was a question if Bitshares and Steam are going to use EOS. Daniel fenced with this question, though indicated this decision is going to be taken by the projects independently. It will be necessary to watch the rates to understand how this issue is going to be resolved. Both on Bitfinex and one more Chinese exchange EOS is going to be traded right after its launch. The ICO start is planned within the timeframe of 5-6 weeks, and within the nearest 3-4 weeks detailed information on tokens allocation and launch date will be released.

During the conference some developers from Odessa, Ukraine along with Lithuanian investors presented the Bitsane exchange. As they claim by now they managed to reach the turnover of up to a million dollars per month. The mode of operation of the exchange is aimed at working with fiat currencies. Out of altcoins they already work with Iconomi, Dash, Ethereum, Litecoin. Ripple is about to be added soon as well. Within a week the team is planning to enable lending and margin trading.

There were many more interesting updates and announcements, which are definitely going to be useful for the industry members especially in terms of recent growth of the price for Bitcoin, which exceeded $2000, Ethereum and Litecoin as well.