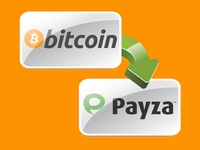 With the help of the new service launched by Payza payment processors, customers no longer need to convert Bitcoin into dollars, and then manually load their card, because converting crypto-currency into regular money will be completed automatically.

This function works with the crypto-currency, which is stored in the user's account. If the client keeps bitcoins on a third-party purse, he will have to transfer them to his Payza account first, then transfer it to the card. This is the way the scheme works

To transfer bitcoins to the Payza card, users must initiate a withdrawal operation on their account by selecting the card as a withdrawal method. When choosing a currency balance for withdrawals, you need to select bitcoin. Crypto-currency will be automatically converted into dollars and credited to the card.

As for other news from Payza, the company also updated its mobile application, where the new feature of automatic bitcoin conversion was added to the old functions as well.