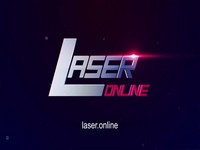 The Laser Online project listed at HyipNews for 59 days, delivers two massive updates for the customers telling first of all about the members milestone achieved. As it's been reported the project reached 15000 active members, which is a great result after nearly two months of performing online.

Another piece of news is about the launch of the Advertising campaign called "Traffic Everest". The team of the project is sure, if anyone wants to achieve impossible and perform the maximum speed possible "reaching to the space", one should build a shuttle to achieve the dreams.

So with the idea of being the best on the market, the admin of the project speaks about the advertising partners, who are constantly helping the team of Laser Online bringing only the most active human traffic with the only one goal - "a shortest way to infinity and beyond!"

Starting from now, weekly reports of Laser Online advertising campaign will be published to public on regular basis to show the company's growth and development. The new goal of the company set after reaching the membership milestone is to spend at least $1,000,000 weekly at best cryptocurrency websites. So $1M WEEKLY GOAL #1stWeek spendings: $100,000 with the key partners involved: CoinMarketCap.com, Cryptocoinsnews.com, NewsBtc.com. At the same time the admin is in constant search for the trusted, impressive and known traffic sources, which is why if anyone has something of the kind in mind, welcome to contact Laser Online with the unique offer - it will be considered for sure.