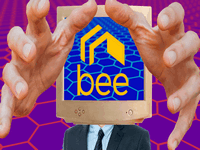 Hackers broke in the mailing list of the blockchain platform for short-term housing rent BeeToken and stole about $1 million from potential investors who would want to participate in the ICO project, as The Next Web reports. Users began to spread screenshots of letters, where those who send money earlier are promised to be given out tokens in a double volume as soon as possible. The letter also specifies the Ethereum address for making deposits and the QR code leading to the same address.

The company confirmed information about attacks on the Twitter account and blog on Medium. BeeToken also warned that invitations to participate in ICO that come to e-mail and in private messages to Telegram are fraudulent.

Hackers started sending out simultaneously with the launch of the official ICO BeeToken. According to the information on the official website of the project, it has already collected more than 4.6 million dollars. At the same time, the top three addresses of hackers collected about 1 million dollars. Last week, BeeToken CEO Jonathan Chow said that their service could not be hacked because "it does not store customer data in a centralized database, as Airbnb does."

Previously, hackers stole potential investors from the Experty project for $ 150,000 a few days before the start of the ICO. At the disposal of the attackers were the names of investors, their e-mail addresses and ETH-addresses. Hackers sent a letter to investors inviting them to participate in the pre-ICO and reported that if they want to get more tokens, they need to transfer the ETH within 12 hours.