BITCOIN AND THE WAY IT AFFECTS THE HYIP DEVELOPMENT 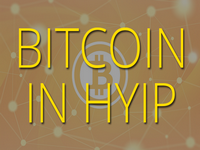 Today we are going to talk about one of the most discussed and controversial things in the sphere of online money-making: Bitcoin and its growing popularity, especially in terms of gaining among HYIP investors. We shall try to outline the further development of the HYIP industry thanks to such convenient anonymous money exchange method as cryptocurrencies (Bitcoin as the main and the first one).

The main principle of HYIP work is anonymity.

Most administrators of HYIP projects respect anonymity. This is understandable, because, as a rule, most investors lose in financial pyramids, and, being an admin of a potential scam you need to be on the safe side not to be found.

Here comes the help from cryptocurrencies that use blockchain technology. The essence of this technology is that the transfer is impossible to track, because it is transmitted through an encrypted node. Information about the recipient, as well as about the sender, is unknown to anyone, which guarantees the safety of admins. Thus, Bitcoin gave a new breath to the HYIP investment market.

Rising cryptocurrency price contributes to the growth of players in HYIPs.

One can argue with this statement, but so far the reality is that we see a huge number of people receiving super-profit thanks to investments in cryptocurrencies (as is the case with Ethereum, the rate of which has grown 38 times in half a year). In general, a large number of cryptocurrencies increased in price since January 1, 2017. This could include Litecoin, Ripple, Bitcoin Cash, XRP, and of course Bitcoin. The growing value of cryptocurrency data increases the welfare of their owners, who are beginning to look for ways to place their cryptocurrencies in profitable places. At all times, people carried an excess return on investment, and here HYIPs come on the forefront, offering good conditions for Bitcoin and other cryptocurrencies . Thus, the rise in prices for cryptocurrency contributes to the growth of investors in HYIP investment projects.

The potential for the development of HYIPs on cryptocurrencies.

Initially, HYIPs accepted only Bitcoin cryptocurrency, but in 2017 the trend has changed dramatically, and now admins increasingly include the ability to invest Litecoin, Ethereum, and other cryptocurrencies, where there is a functionality for automatic receiving and sending funds. HYIPs that work with cryptocurrencies, other things being equal, are more likely to succeed than those that use standard Perfect Money or Payeer. Over time, these systems only complicate the work of the HYIPs, introducing commissions to unverified accounts, and notifying users of the risks.

Therefore, the future belongs to cryptocurrencies. And if you haven't formed a cryptocurrency portfolio yet, it's just about time to do it now, and then safely increase your income with the help of HYIPs.