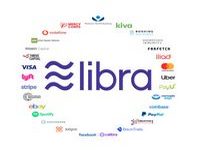 Blockchain technology continues to penetrate into various spheres and this time Mark Zuckerberg himself turned his attention to them. The creator of Facebook has initiated the development of its own cryptocurrency called Libra, and this is perhaps the most discussed topic of recent days. What is this coin and what is the use of it, we'll try to figure out in the article below.

What is known about the Libra coin?

Yesterday , June 18, 2019, the Facebook Libra cryptocurrency was officially announced and the project's Internet resource began its work. Such an event did not go unnoticed - the entire progressive world paid attention to it. Why is there such interest in the novelty? Yes, because the author of the cryptocurrency is not some kind of no-name person, it was Mark Zuckerberg himself - this fact makes the coin extremely promising.

Facebook is positioning its cryptocurrency as a means of payment for people who do not have bank accounts. Anyone who has a smartphone, regardless of country of residence, will be able to use Libra for their needs. According to Mark Zuckerberg, "funds transfer be as simple as sending messages." And if initially Libra will be represented in Facebook itself and partner services, then very soon it will be easy to pay for coin purchases offline. Thus, the cryptocurrency will be focused not on speculators, but on ordinary consumers.

One of the key features of the Libra coin is that the project will not be decentralized. It will be supervised by a specially organized fund of the Libra Association, which includes major investors. It is known that 28 companies have already invested in the coin today, in particular, Mastercard, PayPal, Visa, eBay, Coinbase and Uber. All of them contributed $10,000,000 to participate in the Libra Association. By the time of launching the cryptocurrency network, the number of participants in the fund plans to expand to 100, in order to collect the amount of investments in the amount of $1 billion. Obviously, the company-investors will introduce the coin into the work of their services.

At the moment, little is known about Facebook cryptocurrency, but some information still leaked onto the network:

• Cryptocurrency will be secured with several fiat currencies and low-risk securities. This does not mean that in exchange for Libra, it will be possible to receive some kind of security, just in this way, the coin will be protected from volatility and will give it value.

• Users will be able to carry out operations with the coin through the Calibra wallet, which will work both independently and integrated into instant messengers.

• The full implementation of the Libra coin in Facebook and partner services will be completed in 2020.

• There is some information in`the web that special ATMs will be installed to work with the coin offline.

• Libra Association will not only manage the cryptocurrency reserve fund, but also fully issue coins and destroy them if necessary.

• According to available information, operations with Libra cryptocurrency will not be subject to a commission or it will be very low and will affect only sellers, and not ordinary customers.

Initially, there were more rumors and conjectures around the project than official reports. It was plainly not even known that Facebook was preparing the release of the cryptocurrency, but there were assumptions that the project would be linked to the blockchain. It can even be said that the development was strictly classified and just a few months passed between the first official announcement of the creation of a crypt and the launch of the official website.

The idea of developing independent cryptocurrency came to Zuckerberg much earlier, because about a year ago, former PayPal president David Marcus, who was also on the board of directors of the Coinbase cryptocurrency exchange, moved to Facebook. On the Internet, it was announced that Marcus headed a certain "secret project" and a group of 50 specialists was assembled for that. And while everyone was wondering why Facebook was a new team, this team worked hard on the cryptocurrency Libra.

For the first time conversations about the need to create exlusive means of payment within the Facebook system arose in early 2018. Zuckerberg later announced the development of a project called Facebook Coin. Closer to the summer, the project got rebranded and the cryptocurrency began to be called Libra.

It is safe to say that cryptocurrency is not created with the goal of making money on the hype and getting a bit of fame from Bitcoin. Obviously, Zuckerberg is interested in technology, and not in earnings from the rates highs and lows - as you understand from the information described above, the coin volatility will be low. The option that Zuckerberg, having a reputation and a multibillion-dollar fortune, wants to collect investment and scam investors, is excluded by itself.

It is possible that Mark Zuckerberg is building more far-reaching plans, and the Libra project is a kind of "multi-step" that will solve all Facebook problems at once. We will not exclude the fact that the social network developer has enormous plans to seize the world of mobile payments. Still, Facebook already has a huge base of potential customers in the form of its users, which will easily make Libra a world leader.

What does the creation of cryptocurrency by Mark Zuckerberg say, and also with such well-known investors who have invested $10,000,000 in the project? It says about the very big prospects of the coin, which in the blink of an eye can blow up the list of traditional cryptocurrencies. This is a very big event for the world of digital money, and it won't take long for the universal introduction of the coin to be implemented. Too serious people are behind the project, and the interest of investors only confirms that something great should be expected from Libra.

Mark Zuckerberg has already expressed his opinion that regulators can stand in the way of cryptocurrency. Of course, there is no clear legislation on digital money, but this does not prevent authorities in various countries from encroaching on the freedom of cryptocurrencies. Nevertheless, there is information that Zuckerberg has already met with representatives of the US Treasury, Western Union and the commodity futures commission.

Now we can observe a big rush around the Libra project, because the largest companies are ready to invest in cryptocurrency. Against this background, it is surprising that investment giants Goldman Sachs and JPMorgan did not support the Zuckerberg project. This is explained by the fact that companies themselves do not mind creating their own cryptocurrency, and the Facebook coin is a strong competitor for them.

Summarizing all mentioned above, we note that the Libra cryptocurrency is simply obliged to blow up the world of digital money. And here we will not recall the coolness of the developers of the coin, major investments or its features. The fact that the Mark Zuckerberg family of projects brings together billions of users will make cryptocurrency popular in the blink of an eye. And if transactions with Libra are really as simple as sending a message, then it seems that cryptocurrency will not have competitors.