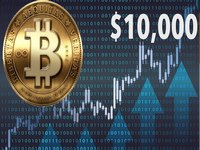 At press time, a slight retracement had sent the pair slightly lower to $8,900, with 24-hour returns still at 3% and weekly performance stronger at almost 16%. Bitcoin holders are currently sitting on monthly gains totaling almost 35%.
Now, however, attention is turning to shorter time frames. For regular Cointelegraph contributor filbfilb, despite Bitcoin’s bullish overall movements, the next close would be crucial in determining short-term trajectory.

Specifically, if BTC/USD were to close below the bullish candle, which took it to current highs, the chance of a bearish reversal would be on the table. The price under such circumstances would then paint a so-called swing failure pattern, or SFP, which in turn may keep the pair lower.
“When price pierces above a key swing high but then closes back below that swing high, we have a potential bearish SFP,” he summarized in private comments to Cointelegraph.
In addition, the 200-day moving average, which has served as major resistance for the past two years, is also hovering around the low $9Ks. Thus, it will likely present a critical barrier for the bulls if a run-up to $10,000 is to occur.

Regardless, Bitcoin was exhibiting multiple trends to excite analysts as the week drew to a close.
Hash rate, a measure of the computing power dedicated to validating the Bitcoin blockchain, hit a new all-time high on Thursday. While figures vary, monitoring resource Coin Dance put Bitcoin’s hash rate at 149 quintillion hashes per second.

Also making fresh progress was overall interest in Bitcoin, with data from Google Trends showing worldwide searches for the term “Bitcoin” at their highest since late October.

Altcoins continued their highly varied bullish price action as Bitcoin hit two-month highs.
Out of the top twenty cryptocurrencies by market cap, it was Ethereum Classic (ETC) which led the charge on Friday, rising over 30% to $9.82.
Ethereum (ETH), the largest altcoin, meanwhile managed 6.5% to trade at $172.
Other solid performers were Chainlink (LINK) and Cosmos (ATOM), both of which delivered around 17% 24-hour gains.
The overall cryptocurrency market cap was $245.6 billion, with Bitcoin’s share at 66%.