INVESTMENT IN BLOCKCHAIN IN ENERGY MARKETS 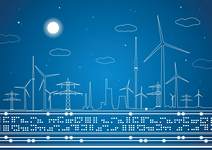 Although $35 billion seems high, it’s dwarfed by the net worth of $1.85 trillion for the energy market as a whole. Key players using blockchain and DLT in the field include Accenture, AWS, Bigchaindb, Deloitte, IBM, Infosys, Microsoft, Nodalblock, Oracle, SAP, Enosi, and Electron.

Blockchain is used within energy markets for data management, financial tracking and interactions. According to the report, drivers for adoption include reducing operational costs and capital expenditure. Increasing automation will see blockchain employed for data security and integrity.

However the projected high rate of growth could be affected this year, as energy markets take a deep hit as a result of both the coronavirus and the oil crisis.

Blockchain already in the Energy Market

Companies are finding increasing numbers of use cases for blockchain in the energy sector. Power Ledger has just announced a partnership with green energy retailer ekWateur to provide almost a quarter of a million French residents with the opportunity to choose their renewable energy source.

VeChain also recently announced the next phase of an ongoing collaboration with Shanghai Gas to develop a blockchain powered ‘Energy-as-a-Service’ Platform and business ecosystem.