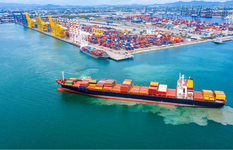 OneConnect Financial Technology, which is the fintech arm of China's largest insurance company, Ping An Insurance, has entered into a joint program with the China Merchants Port Group (CMPort) to build a logistics system based on blockchain for the Guangdong-Hong Kong-Macao Greater Bay Area, according to a March 31 report by the China News Service, a state media publication.

"Since the central government's directive to develop blockchain technology from last year, Shenzhen customs, China Merchants Group and Ping An have started to work together to study blockchain applications in cross-border logistics," Xiaoying Chen, director of Shenzhen Customs said in the report.

The platform will include information from Chinese custom services, port operators, logistics companies, financial institutions and export and import firms in one single system via shared databases on chain. One of its goals is to offer a more efficient tracking system at a lower cost. Financial services will also be more accessible to the trade companies.

The system will have five databases to manage information about trade companies, goods, logistics, contracts, and documents and certificates. It could help government agencies to better supervise international trade and reduce processing time for financial institutions to provide export and import firms with trade finance services.

OneConnect is one of the four "fintech unicorns" groomed by the state-backed Ping An group. One of its focuses is to apply blockchain to traditional financial services through its cloud technology.

SoftBank led a Series A round in OneConnect with a valuation of $7.5 billion in 2018. The firm went public on the New York Stock Exchange in November last year. However, the initial public offering raised $359 million at a market value of $3.63 billion as of its first trading day on Dec. 13.

The China Construction Bank – a national commercial bank – also invested in a blockchain-based trade finance platform where exporters and importers can connect with banks and lending agencies for short-term financing. The bank said last October trading volume on the platform had exceeded $53 billion since its 2018 launch.

Beyond China, both Singapore and a slew of European Union countries have made nationwide efforts to launch their own blockchain-based platforms to facilitate international trade.