BITCOIN VS ETHEREUM WHICH IS NOW SUPERIOR 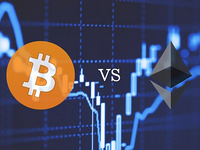 Ethereum was to handle as much as one billion transactions a day by 2020 through sharding. Now three years on, sharding appears unlikely before 2024-25 at best. Until then, eth does not have any advantage over bitcoin where on-chain capacity is concerned, but it does have some advantages where capacity in general is concerned in as far as there’s a lot of work going on in eth with zk-tech scalability.

That comes with a usability tradeoff in as far as you usually have to kind of lock eth in the zk contract which acts as a sort of black box that does accounting off-chain with it then eventually settling on-chain.

If it's to be compared to other second layers like Lightning, then the usability tradeoffs for zk-tech are far, far lower and where dapps are concerned it probably is far easier to implement zk in a way where there is actually no or very minimal tradeoff for the end user.

The other advantage for eth is obviously smart contracts with dapps, and defi, and decentralized exchanges and whatever else they come up with. Flashloans for example are pretty cool, and the open nature of much of this innovation makes the ethereum ecosystem quite dynamic and fairly exciting.

Considering eth's very limited capacity, however, one has to consider just how much of an advantage these dapps are over the plain transfer of value because someone wanting to buy a shipping container from China has to compete for the same space with someone gambling margin longing on Makerdao's DAI dapp.

Currently there isn't much competition for that on-chain space, but the reason why there might not be more usage is perhaps because the market knows there isn't enough capacity, so they don't use it as much as they might have done otherwise.

Bitcoin has its own advantage over eth in as far as it is stable. You can be fairly sure in five years time it will be pretty much the same bitcoin as it is now, while eth clearly is to go through a lot of changes as detailed earlier.

So if you wanted to buy a shipping container full of consumer goods from capital controlled countries, arguably there isn't much reason why you'd go for eth over btc while bitcoin has on-chain capacity.

In addition nowadays even if bitcoin becomes semi-clogged due to too much demand for space, it is probable the same would be the case for eth too as they're pretty much at the same data limit of about 1MB for every ten minutes.

While there may be plenty of reasons why you'd go for bitcoin over eth, including its far bigger computing power that secures transfers to the point an even $1 billion worth of value exchange can probably be considered as pretty safe.

In eth, $1 billion is 5% of its market cap, but it probably would still be fairly safe, yet bitcoin objectively would be far safer.

Meaning in conclusion without that capacity advantage eth becomes more complementary and secondary with its own advantages but without clear superiority at a fundamental level.

While in eth that supply is set by some dev committee which changes the equation from an investment perspective where one has to consider which holds value the most.

So suggesting it is probably unlikely eth will overtake bitcoin any time soon because bitcoin does one thing and does it pretty well: exchanging value in a way even enemy governments can be sure no one can tamper with that exchange at a network level up to $1 billion and maybe at a stretch $10 billion within one transaction as if it is chopped into many transactions then there is no practical limit.

As this exchange happens outside of the banking system, digitally, globally, without accounting requirements and potentially even fully anonymously by just mining it, there are obvious advantage over fiat which is outside the scope of this article.

Those advantages make bitcoin not just an investment, but also a utility. Something 'consumable' in as far as you can buy btc, send it off, and the other party insta-fiat converts it, with neither party caring much about the price of bitcoin as they are using it to transfer value.

ETH can perform that function too, but in a less secure manner and/or without any advantage over bitcoin.

Where more complicated functions are concerned, however, like somewhat artificially collateralizing money or making it 'locally' algorithmic in as far as it follows some contract rule in addition to the whole network rules, or where one wants to play with the idea of 'what can you do with this,' then eth has obvious advantages over bitcoin.

One, Two or Many

We're fools to try and go to 2030 from the present in imagination, not least because it is probably too early to extrapolate from this present, but there are already 'ideological' battles of maximalists v 'no one chain to rule all men' and 'something better will come along.'

Starting with maximalists, they can argue and probably with justification that bitcoin can just add smart contracts and so make eth useless.

It's just a stupid EVM you can copy paste and add it there, a feistier maxi might say. If Justin Sun can do it, our god coders would make it even better, he can add.
An eth maxi would argue ethereum has the network effects and by the time bitcorn adds smart contracts, eth would be light years ahead.

Who wins this argument obviously depends on what actually happens, but presuming they do copy paste it, then the question of network effects becomes which network effects?

Eth has them in dapps, but it's hardly so huge when considering bitcoin has close to 10x the users ecosystem of eth going by market cap.

Code is cheap. People, intellect, and their labour, is very, very expensive, and while just how intellect is distributed is not easy to judge, that bitcoin has the most people is very obvious.
Presuming then we have a merger where the smart contract and value transfer parts somehow become part of one ecosystem within one natively connected network, the idea of many chains may weaken because it is not clear what advantage the other chains would offer.

If you have the bitcoin value transfer with the defi, presumably through somehow interloping different blockchains while still keeping it all within one network, then you have a monetary internet. We all use the same internet because it's the most convenient way, so there is no reason why eventually it wouldn't be one blockchain.

Unless that's just technically not possible. Meaning if we go back to the computer revolution, there is no breakthrough to get different computers to talk to each other, which then would mean there is no internet as it would all be stand alone computers, stand alone blockchains specialized to do a certain function.

We suspect there will be a way to get different 'local' blockchains to merge into one world wide network with customization, but maybe not. Maybe the metaphor is becoming limiting.

Or not. The China firewall is an obvious example of a custom internet still part of a world wide one. Since all of these things are code, it's not clear what would make the blockchain setup so different to not be able to achieve the same.

So there may well be one chain to rule all, but would it be one of the current chains or a new one?

Satoshi Nakamoto said the design was set in stone, and so the answer would depend on whether he was and is a god, or whether someone else comes along to claim a higher right to that title.
If we were really forced to give a view, and it is a preliminary one which can change as it pleases, we'd say it is probable at least for some decades that improvements on the design are better than re-design level improvements.

If we take data storage, for example, it is probable Nakamoto spent hardly much time on it as that is a more long term thing than getting the skeleton up and running.
And bitcoin as well as eth currently is very much a skeleton. It's an idea, basically, fleshed into code but in a very raw manner.

Thus while ever growing storage demands currently are a problem because it's a fairly hard problem, there is no reason why there can't be a lot of innovation at attempting different ways of making unbounded storage requirements something that is very much bounded and easily consumable.

There are many improvements that can be done on top of the foundation, with an easy metaphor here being you can build straight walls for a house, decorative ones for a cathedral, or you can have a twisty skyscraper, but all will need to have columns and at least one floor and a roof on top with the choice yours whether it is a flat roof or bricky pretty.

So bringing us to the conclusion that whether something better does or does not come along depends on execution, both on current blockchains and on potential new ones.
If they can come along with good solutions to obvious problems in a way that maintains that quality of even enemies feeling safe in transacting on the network with each other, then there may be social barriers to a transition but it is unlikely that would prevent such transition because the smarter ones tend to lead network effects and the smarter ones like better.

This is all about eventually. In the meantime market participants are daily passing judgment on that potential eventuality based on the movements of the present, with no clear eventuality currently as a lot needs to be addressed with it not obvious how it would be addressed and by which project.
Making the present kind of the principatas of Italy where locals were autonomous and so could easily experiment until the Venicians gained the upper hand which Brits copied and consolidated into the model of the British empire.

With that story suggesting eventually there will be one model at a technical level because a table is a table, not a chair, but there may be variations at a technical level.
At a social level you'd be looking at monetary policy which is a very different subject and not quite one that can realistically be experimented with at this stage due to the technical level constrains of dial up capacity.