THE BITCOIN HALVING EVENT IS ONLY A FEW DAYS AWAY 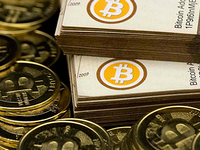 The Bitcoin Halving event is set to happen on May 11 and the entire cryptocurrency market is watching to see what this could mean for Bitcoin, other cryptocurrencies, and the underlying Blockchain technology. Bitcoin halving is a control-mechanism that Satoshi Nakamoto programmed into Bitcoin's source code to ensure the deflationary property of Bitcoin by halving mining rewards as a means of reducing the supply of new Bitcoin in the market.

In the pre-halving period of Bitcoin, starting in 2009 when Bitcoin's genesis block was mined, miners received a reward of 50BTC for every block mined. When the first halving happened in 2012, mining rewards were cut from 50BTC to 25 BTC, and the price of Bitcoin soared from about $12 in November 2012 to a peak of around $1,100 in November 2013.

Now, the third halving is only a few days away, mining rewards will drop to 6.25BTC, and the market is filled with predictions of how the crypto market will fare going forward.

The halving is happening at the same time that governments are printing money to shore up the global economy in response to the recessionary pressures of COVID-19. President Trump has already signed a $2 trillion economic rescue package into law, and other world leaders are taking similar actions.

However, one of the major pro-BTC arguments relative to fiat currencies is that the supply of BTC is fixed, unlike fiat currencies that could practically be printed at will through quantitative easing. Hence, many people expect the price of Bitcoin to rise after the halving because a reduction in mining rewards will reduce the amount of new Bitcoin available for sale.

The predominantly positive sentiment is also being echoed in traditional finances news. For instance, CNBC's Fast Money did a feature on Big Crypto Breakout with crypto investor Brian Kelly who noted that "in the past, this (the halving) has been a catalyst for very big run-ups. We've had a tremendous run-up coming into this; it's got some wood to chop around $9,000. But thinking from medium to long term, you now have an asset that will be more scarce than gold based on the stock-to-flow (S2F) ratio in an environment where the entire world is printing money."

Bitcoin was developed in response to the last global economic meltdown as a decentralized store of value that is immune from the undue influence of a government or its agents. The economic fallout of the pandemic provides an opportunity to test the safe-haven theory of Bitcoin. According to Samson Mow, the chief strategy officer of Blockstream, in a chat with Coin Telegraph, "this Bitcoin halving is unique because of the unprecedented amount of money being printed. It's very bullish for Bitcoin."

It is also interesting to note that the expected rally after the halving might become a self-fulfilling prophecy. In the last one month, the price of Bitcoin has surged more than 35% as bullish investors take positions ahead of the halving. If the bullish sentiment is sustained after the halving, the bullish predictions suggest that Bitcoin's price can soar to the figurative moon.

For instance, former Goldman Sachs hedge-fund manager Raoul Pal, in April research note observed that "gold can go up 3-times or 5-times in the next three to five years. Bitcoin, well, that's a different story. I think [bitcoin] can get to $1 million in the same time period."

Also, crypto analyst PlanB has predicted that the price of Bitcoin could touch $288,000 based on his prediction model which factors the number of coins entering the market through the mining route in comparison to the current market supply - which suggests that the model factors the halving heavily into the price prediction.

At the fundamental level, the halving should reduce the supply of Bitcoin, and a drop in supply should ordinarily trigger an increase in price if the demand stays flat or trends upward. However, this halving event is happening at one of the most economically-sensitive periods of human history. The world is still battling COVID-19 and its attendant global recession.

In the chat with Coindesk of Ryan Watkins, bitcoin analyst at Messari observes that "most fundamental-based bull cases on the having have little merit, but the halving is a good marketing event… I'm not confident bitcoin will be able to decouple from other asset classes while macro uncertainty overhangs, at least in the short term and around the halving,"

Similarly, Max Boonen, founder of B2C2, a prominent over-the-counter liquidity provider opines that "Bitcoin cash now trades lower against bitcoin, having gone down from 0.035 pre-halving to about 0.032 today… to argue that bitcoin will rally where its cousin bitcoin cash didn't is similar to saying that the bitcoin market is less efficient. That seems hard to me."

In reality, Bitcoin has only had boom and bust cycles, but it has never been through a recession. Hence, there are no data against which you can backtest how Bitcoin is likely to fare if the world sees a 2008/2009-ish global economic meltdown or worse.