WHAT DOES BITCOINS LATEST HALVING MEAN FOR AMERICAN MINERS 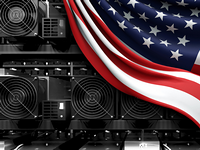 Following the 'reducing supply increasing demand appreciates value' narrative, Bitcoin has erased all major losses post the utterly black, Black Thursday crash to trend around the psychological $10,000 price level. But mining activity statistics show a very different picture. Something like the one below.

From 137 EH/s observed on Monday, Bitcoin's mining hash rate has dropped almost 37% to 87 EH/s.The scenario is pretty clear. Miners are jumping the ship. The halvening of block rewards is pushing out Bitcoin miners who are unable to register profits out of the minting game. But to what extent?

Well, according to estimates shared by the Bitcoin mining pool, Poolin VP Alejandro De La Torre around 30% of folks are a part of the exodus. To quote an excerpt from one of his articles published on Medium,

The upcoming and final difficulty adjustment with the 12.5 BTC block subsidy will occur one week before the halving (1008 blocks), and the difficulty is projected to increase. We expect that the first 1008 blocks after the halving will be mined slowly as huge numbers of unprofitable miners drop off the network. We estimate around 30% of the entire bitcoin network (if our assumptions are correct) will be squeezed considering that the first 1008 blocks will have the pre-halving difficulty, but half the reward.

As per a report by CoinDesk, miners using old generation rigs like Bitmain's Antminer S9 were the ones to show themselves the door. Were US based Bitcoin mining folks also amongst the exciting crowd?

Ideally traders and investors are supposed to be on a 'Buy Bitcoin America' mission as a response to the Bitcoin block reward halving and the US Federal Reserve's dovish monetary policies to revive the economy. That would mean that BTC prices would continue to rise following frantic buying activity. Consequentially miners would stand to gain through wider profit margins.

Unfortunately that's not the case as Bitcoin price appreciations are a direct result of increased capital infusions happening not suddenly but over a period of time(in cycles). And from the current state of BTC markets, a price rally is out of question, in turn implying a downtrend.

That in combination with high electricity prices in the vast majority of places and especially surging rates during summers have posed serious profitability bottlenecks for US based Bitcoin miners. Selling everything off and closing down may have been the only viable option during the halving.

Also, according to Poolin, miners belonging to the 'lower quartile' that use 16nm and 10nm chips in rigs have a high chance of capitulating post the block reward halving.

As per estimates, 15-30% of the Bitcoin mining fraternity belongs to the lower quartile. Since almost 65% of the mining contribution comes from China, where cheap energy is the norm, and mining folks hoard the most advanced hardware, it can be assumed that American miners with 16nm and 10nm rigs have shown themselves the way out.

Clearly the IRS, United States' apex authority on taxes still hasn't figured out a way to tax Bitcoin and crypto transactions. That's why the government body has hired independant crypto tax consultants to help them do the job.

The IRS has always maintained a 'crackdown like stance' on Bitcoin and crypto dabblers, issuing warnings to folks to not escape declaration of earnings from sale of digital assets. All this in absence of a clear national regulatory picture for cryptos. The strongly antithetical position stems from the sheer dislike for Bitcoin and the aggregated crypto asset class. U.S. Treasury Secretary Steven Mnuchin went as far as branding Bitcoin and crypto a 'national security issue' last year.

This scenario has made it difficult for American Bitcoin miners to go about their business since selling newly mined BTC's to cover costs in a crashing market results in losses, and they too have to be reported. Loss laced transactions are also taxed since crypto was involved. And with the halving and reduction of block rewards, miners have no choice but to quit.

However the day hasn't run out of light. Energy producers in the United States have started mining Bitcoin either to make more money or lighten their regulatory burden by going green. For example a New York based natural gas power plant recently announced the installation of a fairly large mining farm. Entry of power manufacturers in the mining space will go a long way in ensuring that the United States doesn't get left behind in the minting and mining of Gold 2.0.