DESPITE COVID19 BITCOIN PRICE UP 50% THIS Q2 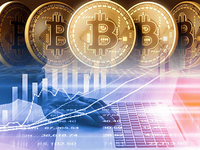 From December 2019, where COVID-19 was first noticed in the Chinese city of Wuhan, to this moment where the world continues to feel the impact of the pandemic, there has been a reverberating imbalance in the economic situations of the whole world, and again the total universe has been put in abject recession.

The world, like never, has been pushed into acquiring more Bitcoin and this has resulted in an increase in the price of the world’s leading cryptocurrency.

The FED money printing strategy and the COVID-19 funds offered to citizens and business owners added more to the accumulations of Bitcoin during this period, this has been the observations of many crypto experts.

Throughout March, Bitcoin was revolving around $6,000 but got a major boost towards the end of April and moved above $7,000 mark.

On Some platform, May 8 was Bitcoin’s best day in 2020, the digital currency touched $10,000 and even went beyond. At that time, Bitcoin price saw a rejuvenation of over 50% return, this is despite COVID-19.

Bitcoin Halving Factor
One would have imagined that the digital currency would go beyond the mark, considering the huge expectation behind Bitcoin halving which is known for pumping the value of the digital currency high. nevertheless, the world’s present economic situation may be the reason why BTC did not see a great surge after the halving periodic crypto exercise.

Now, Bitcoin has seen close to 50% price surge this Q2 alone, and we are not yet at the end of the quarter.

If things work as expected, there is a high possibility of BTC going beyond the all-time high of $20,000, this is considering what used to be the order of the day after every halving exercise.

Since then, Bitcoin has not gotten to the point, the digital currency has been trading below its all-time. However, BTC had moved closer to $13,000 in June 2019.

Meanwhile, investors have started moving into the crypto world after the May Halving, this also has added to the growth of the crypto market. At the time of filing this report, Bitcoin is trading at $9555 after losing 0.06% in the last 24 hours.