TOP 8 ALTCOINS TO COME OUT WINNING FROM THE 2020 CHAOS 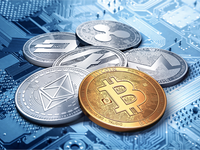 By Eric Marriam
Year after year cryptocurrencies keep reaching new highs and lows What influenced the market last year and what are the top crypto coins? Moving on to the
Sponsored Links

Year after year, cryptocurrencies keep reaching new highs and lows. What influenced the market last year, and what are the top crypto coins? Moving on to the end of the second quarter of 2020, we can look back to the crypto trends of 2019 and see which ones have demonstrated staying power. As a rule, the way Bitcoin moves defines the entire crypto market, and most altcoins are boosted by positive news about the leading cryptocurrency. The crypto industry is predicated upon a large number of OTC deals and hidden transactions, as well as the constantly changing news landscape and regulation-related information.

In late 2019, the 3 key growth drivers for cryptocurrencies were the May 2020 Bitcoin halving — which is now expected to positively affect the value of the coin —, the active introduction of crypto legislation in 2019 — with many laws and regulations that have already come into force in 2020 — and the negative forecasts of political and economic instability based upon the negative key rates introduced by central banks, ballooning global debt and slowdowns in global productivity.

As it stands now, there is still an impending danger that COVID-19 will cause a financial crisis more damaging than that of 2008. However, for the top 8 cryptocurrencies, this may be an opportunity to establish themselves as means of preserving accumulated capital and good investments. These successful crypto coins have all chances to take hold in the post-virus market due to having either a significant breakthrough in the industry or boast a large capitalization for 2019.

Many may be surprised to see ChainLink (LINK) on the list of the discoveries of the year 2019 smoothly going through 2020. The platform on which the altcoin operates is essentially designed to bridge the gap that exists between smart contracts based on blockchain technology and real applications.

From the economic point of view, in the past year LINK started relatively slowly – the price of one token within five months from the beginning of 2019 increased from $0.31 to a little more than $0.45. However, by the first week of July, the cryptocurrency reached its peak – the price of one token was $3.74. And although the crypto asset has lost its rapid financial momentum over the past couple of months, it is still trading at around $3.96. In general, over the last year, the LINK / USD trading pair grew by more than 500%, and the LINK / BTC pair spiked by 300% over the same period. This is, to put it mildly, an impressive achievement.

Released in mid-2017, Binance Coin (BNB) is an altcoin that can be used both for trading purposes and for paying commissions for transactions on the Binance exchange. In addition, the crypto platform itself provides token holders with various bonuses and discounts when using digital currency for internal operations.

The cost of the cryptocurrency at the beginning of 2019 was $6 per token. Five months later, by the last week of May, the price of one token rose to $35.20, which indicates an increase of more than 450%. However, during the third quarter of 2019, the cost of BNB decreased from $33.10 to $15.79. Over the past couple of months, the price of the cryptocurrency has been unstable, nevertheless, the current cost of the asset is slightly above $16.5. Last year the total value of the BNB / USD pair increased by more than 140%.

Tezos (XTZ) is a cryptocurrency and decentralized computing platform that uses a formal verification protocol, as well as a consensus module for internal management solutions. XTZ owners can receive additional tokens as a bonus for creating and verifying blocks.

XTZ started last year at a price of $0.47. But by the end of the first quarter of 2019, the cost of one token increased to $1.06. XTZ’s profitability continued to grow between April and June. And last May the cryptocurrency reached its annual maximum of $1.88 and started to fall. However, since the beginning of December, the crypto asset again gained momentum. Right now, one XTZ token is trading at around $2.73. By 2020, the value of the XTZ / USD trading pair increased by more than 190%.

Bitcoin Cash (BCH) is in the TOP 5 of CoinMarketCap’s highest rated cryptocurrencies.

During the second week of January’19, the price of BCH was $135. But, by early April, the cryptocurrency soared above $300. Its value reached its maximum for the year on June 26, when the asset was trading around $479.96. Throughout the third quarter of 2019, the price of BCH remained relatively stable, hovering around the $300 mark. However, since the beginning of November, the value of the cryptocurrency has been declining but going quite steadily even during the market crisis. As of May 2020, one BCH token is trading around $233. Over the last year, the value of the BCH / USD trading pair grew by more than 30%.

Bitcoin SV (BSV) is a Bitcoin Cash hard fork that has restored the original Bitcoin protocol. BSV stands for Satoshi’s Vision and is backed by CoinGeek Mining with development work by nChain, according to their website.

Litecoin (LTC) is among the ten cryptocurrencies created by Charlie Lee as an alternative to Bitcoin. The asset reached its all-time price peak in 2018, nevertheless, it is still on our top list. And here is why.

The price of LTC was $32 during the first week of January. But by June 22, the altcoin managed to reach a record for itself of $141.73 per token. Since then, LTC’s performance began to decline. Over the year, the price of the LTC / USD trading pair increased by about 40%. At the time of writing, the cryptocurrency is trading at a price of $43.67.

Ethereum (ETH) is the second most popular digital asset on the market, according to CoinMarketCap. Ethereum developers designed the platform as a “global computer” for smart contracts – a digital protocol that helps simplify, verify, and enforce a contract whose terms have been predefined.

In January 2019, Ethereum was trading at around $116. Over the next six months, the value of the second largest cryptocurrency continued to grow, reaching its maximum for the year at $334.66 on June 26. After going through a bullish trend, the price of Ethereum began to decline before finally settling down in the range of $130- $150 at the end of November, thereby demonstrating an increase of about 20% since the beginning of the year. In March 2020, ETH went rapidly down with the market, but this May it’s on the rise again – it’s now around $203.

EOS is a cryptocurrency platform that developers can use to create new decentralized applications. The EOS token is used to facilitate transactions within the platform. Also, the EOS blockchain was designed to provide high scalability. It has a lot of space for making individual settings for programs that operate on the basis of EOS, which is one of the main reasons for the popularity of the project.

As for the financial performance of EOS, the digital currency was trading at around $2.23 during the second week of January 2019. Between February and May, the value of the crypto asset grew, reaching $8.54 as of May 31. And over the next five months, the price of the cryptocurrency continued to fluctuate from $3 to $3.80. Since the last week of November, the cost of EOS had remained quite stable until it spiked to $5.31 in January 2020 and then subsequently fell to $1.90 in March. Now the digital currency is trading at $2.53 per token.

What to Expect from the Crypto Market 2020

After Bitcoin passed through its third-ever halving on May 11 and surpassed the level of $9,000, a lot of analysts predict a bull rally on the market even greater than that of 2017 when the BTC price rose from $1,000 to $20,000 in less than a year. As we have mentioned, the BTC rise might make it possible for altcoins like Tezos to develop bullish patterns of their own, while XTZ is doing even better than BTC itself, gaining 62.5% with a current price of $2.53.

The crypto market is changing before you can say Jack Robinson, that’s why we try to give our readers heads up as to the pitfalls of trading in this turbulent time. Choosing a crypto exchange is as crucial as choosing the coins you want to trade. You need to pay attention not only to the design of the site but to the exchange rate, number of trading pairs, and the exchange’s reputation in the community. When you check a website or even read a review, some information might slip away from you.

For instance, recently Binance, KuCoin and Bitmex were charged with offering unregistered services. All of the above resources might perfectly perform their functions, nevertheless, they have to be taken with a grain of salt in light of recent events. At the time of publication, there are a few crypto exchanges like HitBTC that have neither been hacked or faced a lawsuit against them.

It is safe to say there are a handful of crypto exchanges that enable you to buy and sell cryptocurrencies safely, including Bitcoin Cash, Ethereum, Tezos and other altcoins from our top list, you just have to make sure you find the right one for you. We remind you to always do your own research before trading.