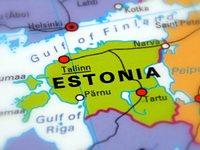 Back in 2017, the Estonian government rocked the legislative side of the crypto world when they introduced a raft of new laws designed to support crypto projects. These licenses split into two different categories: those looking to operate a crypto exchange and those looking to undertake an initial coin offering. Both company types stood to benefit from the first “real” cryptocurrency licenses anywhere on the planet.

As a result of these licenses, entrepreneurs digitally flocked to the small but great Baltic nation. The Estonian government was ahead in a number of ways. Not only was the country a trailblazer with crypto licenses but it also offered the ability for citizens of any nation to obtain a “digital residence.” This digital residency permitted entrepreneurs to locate themselves or their companies in Estonia in a legal sense, thereby obtaining the desired crypto licenses much easier, even if they conducted business elsewhere in the world.

This ultra-modern combination of digital residency and the ability to operate a licensed cryptocurrency firm impressed almost everyone in the crypto industry — especially those looking for transparency and security. In total, around 2,000 companies, just a half a year ago, have obtained cryptocurrency licenses since Estonia began issuing them (this number is based on all crypto licenses issued).

These new measures have been strategically implemented as a result of the new European Union Know Your Customer laws passed down by legislators the year before. In a nutshell, these new laws require member states to regulate operations of companies that work within the cryptocurrency industry. The overall aim of these new laws is to stop money laundering within the relatively unregulated industry; regulators and financial bodies have often cited this as their primary concern with cryptocurrencies, generally.

However, many observers have pointed out that the Estonian laws already met the new EU requirements. So, why were they implementing new rules?

Under the “old” license laws, companies applying for a license were required to appoint an individual responsible for the KYC aspect of the operation — essentially, a compliance officer. This individual would have to provide a certificate from their local police authority to certify a clean background. Additionally, there was a requirement that at least one of the directors was an EU resident and that the Estonian company had a registered address in Estonia. Such standard requirements for a financial license are quite enticing, especially if it only costs around $400 to obtain.

When the new EU laws are placed side by side with the old Estonian laws, one can see that they run almost parallel in their requirements.

The new Estonian laws, however, place a burdensome and overly complex regulatory obligation on firms looking to regulate themselves in the crypto space. It seems Estonia took a massive u-turn on whom it was attempting to attract for these licenses. If the old Estonian license laws were designed to attract cutting edge budget-strapped startups, then the new license laws are designed to keep them away.

The obligations for companies wishing to keep or obtain an Estonian crypto license now include elements, such as a local resident director, a local office and a $3,700 fee. This is quite a stark difference from the earlier price and obligations placed on companies. These new requirements in and of themselves do not seem burdensome. Naeem Aslam, a professional finance trader from London, did some research into what it takes to keep the Estonia-issued license, stating:

“The cheapest any company is currently offering Estonia compliance services for, charge in excess of $1,500 per month, including a one-off payment to become compliant.”

He went on to explain that during his research, “some companies that were contacted simply cited they were pulling out of the Estonia market and were unable to assist or give a price.”

This means companies now face the reality of a yearly fee between $18,000 and $20,000. Naturally, as anyone who has worked in the startup world will agree, $18,000 a year simply for a license, which can be obtained in another jurisdiction for a quarter of the price, is not an attractive or realistic prospect.

Consequently, the number of crypto companies leaving Estonia has skyrocketed. Many are looking toward the new United Kingdom Financial Conduct Authority crypto license or elsewhere in the world, such as countries that offer various “sandbox” licenses.

After having compared the crypto laws and the new European laws, many argue that the reason for this fee increase is simply nothing more than a cash grab. The Estonian government has been trying to leverage its position as a country with a large number of companies possessing these licenses, attempting to improve income for both the regulators and the domestic economy. If that was, as many suspect, the overall idea, it seems to have backfired dramatically.

Although many cannot blame Estonia for looking to capitalize on its newfound popularity within the crypto market, it will ultimately benefit the citizens of Estonia by doing so. Unfortunately, it seems that its plan to change the laws has become so cumbersome that companies are simply leaving to obtain other licenses, rather than comply.