UNICEF TURNING TO CRYPTOCURRENCY IN FIGHT AGAINST COVID19 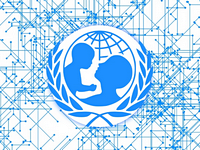 UNICEF announced last month that it is to invest 125 ether (worth around $28,500) in eight companies from seven different countries as part of its cryptocurrency fund (CryptoFund) aimed at addressing global challenges.

This could be followed in the months ahead by a similar fund which using bitcoin, according to UNICEF blockchain lead, Christina Lamazzo.

“To date, we haven’t had any large bitcoin donors, but we’re very much looking forward to bringing a large donor onboard,” she tells Finextra Research.

In addition, UNICEF is looking to build a “consumable block explorer”, which would allow the general public to follow the trail of funds, as well as a set of internal tools to track balances and valuations across different crypto exchanges.

“This would help us work with cryptocurrency better as an organisation and further enable the crypto funds to support the companies that we’re working with,” Lamazzo adds.

The eight recipients of CryptoFund have already been provided $100,000 in fiat money from the UNICEF Innovation Fund to develop open-source digital services that can tackle economic, health and educational problems in the recipients’ home countries.

The CryptoFund is aimed at supplementing this initiative to help companies specifically address the challenges created by the Covid-19 pandemic, which has brought to a head the problems that UNICEF’s funds are seeking to tackle, such as food supply and education.

Investees have sought to mitigate some of the damaging effects of the pandemic on children through collaboration with governments and other local organisations in tracking delivery of food, offering remote learning and tending to other problems caused by lockdown and isolation.

Among the companies receiving 125 ether are StaTwig from India which is piloting a blockchain-based app designed to track the delivery of rice to impoverished communities and Utopic from Chile which aims to help improve children’s literacy from their homes using a WebVR-powered learning game.

“We’re making investments into emerging technologies across data science, virtual reality and blockchain,” says Lamazzo, “but we’re also looking at the modality of the funding with the startups and trying to understand its benefits and drawbacks, so we’re going through this learning process together.”

UNICEF also believes that using cryptocurrency for funding would help to meet the demands of donors who regularly use crypto as a store of value and as a means of exchange.

Lamazzo describes how they were approached by prospective donors who hold substantial amounts of bitcoin or ethereum and wished to use it for charitable causes without the task of liquidating their coins back into fiat currency and incurring additional costs.

The Coronavirus pandemic has also made the conventional channels for distributing such funds less functional, amplifying the benefits of using cryptocurrency. UNICEF claims that the transfer of funds was completed in less than 20 minutes with costs of less than $20. Chris Fabian, senior adviser and co-lead of UNICEF Ventures, describes the “real-time transparency for our donors and supporters” as “the tolls we are excited about”.

Among the many possible benefits of the mainstream adoption of cryptocurrency is financial inclusion through bringing the underbanked population into the world’s monetary system and removing some of the barriers and frictions associated with remittances and charitable donations. The transparency offered by a distributed ledger may also offer greater comfort to would-be donors.

“This is something we’ve tried to harness with the crypto funds specifically,” Lamazzo says.

“We’ve launched a crypto fund website that allows people to go on and see the donations coming in and going out. I think the transparency is one of the obvious benefits of using cryptocurrency, as well as the speed of finality.”

Lamazzo however believes it is a misconception that the typical barriers to financial inclusion are gone when using cryptocurrency.

While costs and settlement times may decrease, a number of the other processes and procedures that would be encountered using fiat currency remain. For example, verifying the identity of donors does not go away simply because the donation is made using ether or bitcoin rather than dollars or euros.

“However, I do believe that using cryptocurrency and other digital currencies more generally allows us to have a conversation around how we make sure that those barriers are being addressed and reduced,” Lamazzo acknowledges.