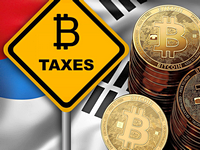 According to local reports, the South Korean government is seeking to impose a 20% tax on digital currencies. The East Asian country has been working on digital currency taxation for several months now. Earlier, the Ministry of Economic and Finance proposed amendments to the tax bill to see the government impose income tax on cryptocurrencies. The ministry also claimed to be contemplating the possibility of imposing capital gains tax as well.

The capital gains tax could soon become a reality.

According to the local news outlet Newsway report, the capital gains tax in South Korea could become a reality soon. The outlet reported that the country’s parliament is deliberating on a private member’s bill that could introduce the tax. If passed, the bill will also change the classification of cryptocurrencies from currencies to goods. While crypto can be used as ‘electronic certificates of economic value,’ they also qualify as assets when they are used for sales purposes. Earlier, a South Korean had declared that until now, virtual assets have been recognized only as a function of currency and have not been subject to income tax, but recently, they are increasingly being traded as goods with property value.

Crypto regulations get more strict around the globe.

South Korea has been at the forefront when it comes to regulating the crypto industry. The East Asian country passed a bill earlier, making crypto trading a legal activity. However, in most countries, crypto regulations are still in a grey area. South Korea has been planning to tax cryptocurrencies for a long time, and it could soon become a reality. The experts from the Korea Tax Policy Association urged the government to start off with a low-level trading tax. A recent survey conducted by wallet provider Childly found that 66% of respondents are in favor of taxing cryptocurrencies.