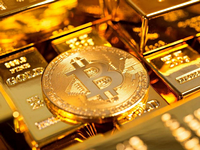 The Bitcoin market has finally broken out of its consolidation phase and surged past its important resistance at $10k. As the world’s largest crypto hovers just over $11k, it was also moving close to the precious monetary metal – gold.

Gold’s qualities have often been compared to that of Bitcoin, and the digital asset has been termed as digital gold for mirroring certain qualities. One of these qualities was of being a safe haven asset, which would not waver due to global economic activities. Recently, gold reached an all-time high over the past week, while Bitcoin’s safe-haven narrative was being questioned upon its month-long consolidation. This surge in BTC’s market reinforced its safe-haven narrative.

While the market has been noting nominal interest rates for the foreseeable future and inflation expectations still moderate, but with the potential to rise, holding non-yield producing assets such as gold and Bitcoin is increasingly attractive, noted a recent report from CoinMetrics. There has been a growing trend of people using Bitcoin as a call option on inflation, but the coronavirus and its monetary and fiscal response have increased the uncertainty in the future path of monetary policy, inflation, and growth, all of which are supportive to Bitcoin’s prices. At present, the correlation between gold and Bitcoin approaches its all-time high, a level that was last seen in March.

According to the chart, the correlation between the two assets has normally oscillated around zero while reaching brief moments of high positive and negative correlation. Currently, the correlation was at a high positive and it can be sustained, it might act as an indication in a shift in Bitcoin’s response to geopolitical and macroeconomic developments.
As the largest crypto marches higher each day and its balances on exchanges fall, the following weeks will be crucial to assess the direction of the price trend for Bitcoin.