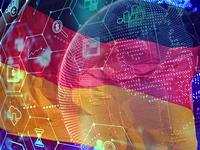 A new law in Germany is set to introduce digitized securities to the country for the first time, giving a legal footing to the federal government’s strategy for blockchain.

According to a statement accompanying the publication, the regulators consider digitized securities to be a core aspect of their blockchain strategy for Germany in the future.

Current rules in Germany require securities to be secured in a document, with a paper certificate a fundamental legal requirement. The use of blockchain for digital securities eliminates this need by recording the instrument to the blockchain, guaranteeing compliance and liquidity for digital instruments.

The regulators said that the new bill will also offer clarity, with the Federal Financial Supervisory Authority granted oversight as primary regulator for blockchain-based securities.

Known as BaFin, the regulator will oversee the issuance of certificates, as well as regulating the maintenance of ledgers in line with its obligations and powers under the Banking Act.

The move brings Germany into line with other countries worldwide, at a time of increasing global drive towards embracing digitized securities. In July, the U.S. joined the fray with its new Ethereum-powered fund for digitized Treasury securities.

Digitized securities are expected to play an increasingly mainstream role in finance in the future, with the technology introducing significant efficiency and cost savings compared to current methods of trading in securities.

With the German proposals now on the table, it looks set to become the next country to take steps to modernize its securities legislation.