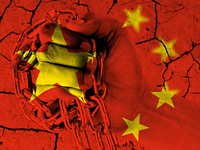 The Inner Mongolia region of China is a prime hotspot for bitcoin miners. The energy is cheap and plentiful, so if you’re looking to potentially be part of the extraction process for new coins, this is probably the place to do it in.

However, if you show up to do business within this region, make sure you don’t lie on your application form, and always be clear about who you are and what you’re looking to accomplish. Approximately 21 mining farms – including those of Ebang, China Telecom and Bitmain, the biggest bitcoin mining pool of all time – have been penalized for potentially being unclear about their identities and their intentions while doing business in the Inner Mongolia region.

It seems that these companies tried to disguise themselves as big data companies or cloud computing firms as a means of garnering additional energy benefits that are otherwise not available to bitcoin or crypto mining companies. This tactic has since backfired, as not only are they not getting access to the cheaper electricity costs the region is known for, but they are now being required to pay higher bills if they’re looking to continue their operations.

On paper, the numbers don’t seem like much. Kevin Pan – CEO of Pool In – explained that each of these companies can expect to pay about $0.015 extra per kilowatt hour they spend mining cryptocurrency. This is a relatively small number, no doubt, but when one considers the amount of time and energy that’s required to extract new bitcoin units, this figure is going to spike through the roof, and these companies can expect to pay a lot more than they originally intended to fork out for energy.

As it stands, China is the country that seemingly has the most power and energy necessary to mine new bitcoins and cryptocurrency units, but every once in a while, regulators have to pull the rug out on operations that aren’t doing what they’re supposed to. However, if China is looking to retain its position as the top mining nation, incidents like these can carry consequences.

For example, costs for kilowatt hours spent on crypto mining within the Inner Mongolia region already stand at about $0.038 – $0.040 per day. With these new expenditures added on, most of the penalized companies – granted they’re running at a capacity of approximately 10,000 kilowatt hours per workday – can expect to pay more than $3,000 at the end of each shift.

In the end, it’s likely these companies may begin to look for other options, meaning China could wind up missing out on business from some rather large firms. Still, Thomas Heller – former F2Pool executive – is unclear how hard the impact on China’s mining economy will be. He states:

There are a number of large coal-powered mining farms in Inner Mongolia, and many more in other parts of China such as Sichuan and Xinjiang.