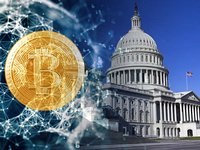 Digital signatures on the blockchain will be recognized and enforceable by the U.S. law if the proposed bill gets passed. The bill will make smart contracts legally binding, setting the stage for enterprise adoption of blockchain technology. The bill titled “Blockchain Records and Transactions Act of 2020” was introduced by Rep. David Schweikert, the Republican congressman from Arizona, and co-sponsored by Rep. Darren Soto, a Democratic counterpart from Florida.

The law seeks to amend the U.S. law on electronic signatures in commerce.

The proposed bill seeks to amend the U.S. law on electronic signatures in commerce and extend its applicability “to electronic records, electronic signatures, and smart contracts. It further seeks to extend legally bound signatures to anything created, stored, or secured on or through a blockchain, to provide uniform national standards regarding the legal effect, validity, and enforceability of such records, signatures, and contracts, and for other purposes. The bill was introduced before, back in 2018, but it fizzled out on the house floor and never came to a vote.

The proposed bill is the U.S. lawmakers’ latest effort to regulate the digital currency industry as it continues to grow and gain mainstream adoption. Earlier, the House of Representatives introduced two new bills seeking to give the U.S. Securities and Exchange Commission (SEC) authority to determine which digital currencies are securities and give the Commodity Futures Trading Commission (CFTC) regulatory power over crypto exchanges, as reported by Sahil Kohli earlier.

Crypto regulations in most countries are still in a grey area as lawmakers work their way through. One of the key figures in the U.S. march towards regulating digital currencies has been Darren Soto from Florida.