TOP 5 CRYPTOCURRENCIES THAT WILL SHOW EXPLOSIVE GROWTH IN 2021 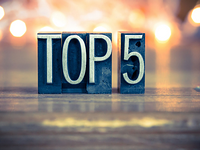 If you ever decide to invest in cryptocurrency, first of all, you should choose what to buy. Of course, you need to know the basics of the blockchain technology, be able to create crypto wallets and correctly execute transactions. But still, it is important to determine whether this cryptocurrency is profitable and if it will be possible to sell it later at a higher price.

There is no definite answer to the question “What cryptocurrency to invest in?”. Before investing funds, you need to do a market research and analyze the prospects of a certain project. Pay attention to the following indicators:

The popularity rating in the blockchain community. If the trading ticker of this crypto coin can be found on most major crypto exchanges and the news related to its peer-to-peer network is published by a respected blockchain publisher, then it means that it is one of the most promising cryptocurrencies.

Convenience of transfer. Reputable blockchain startups release several types of crypto wallets, moreover their coins are supported by many third-party multicurrency storage companies. It is quite an important for an investor, to have a reliable crypto wallet (ideally a hardware wallet).

Safety. From the above said, the conclusion suggests itself that a promising network should be protected from hackers on a high level. The best cryptocurrencies working on POW have to have quite a strong network so that this can minimize the chance of 51% attack. And if yhe project you chose uses an alternative consensus algorithm, it should have a well-thought-out scheme, which will have protection against unscrupulous validators.

So which crypto coins will grow in 2021?

Bitcoin is at the top of the cryptocurrency Olympus and is the best digital coin for investment. It exists for more than 10 years, and the whole blockchain industry started with it. Satoshi Nakamoto’s digital coin was hardly worth a cent 11 years ago, but today you can get $9000 by selling it. Those who bought 1 BTC during the crypto winter of Dec 2018 – Feb 2019 from $3200-3500, could sell it for $11,000 in summer, receiving over 200% of net profit. According to one of the pioneers of the crypto industry, Hal Finney, the final cost of one BTC coin should be around $10,000,000.

The second largest digital currency in terms of capitalization does not have hard emission limitations. The ETH staking will be launched in 2020, which will certainly cause a new round of demand for this digital asset. Ethereum staking income can be calculated with the help of a special calculator. The mastermind behind this project is Vitaly “Vitalik” Buterin, a Canadian programmer with Russian origin.

Thanks to his enthusiasm and dedication, thousands of developers joined the team. This year, the team has launched a test version of the Ethereum 2.0 network upgrade. The system is constantly shifting from the POW algorithm to staking, which will reduce emissions by up to 2,5% and boost long-term storage of ETH tokens. Moreover, Ethereum serves as the digital fuel for the DApp ecosystem.

Neo crypto platform (formerly called Antshares) is a Chinese version of Ethereum. During the rebranding process, the developers completely renewed the project. They didn’t only change the name, but also the blockchain nodes settings and technical documentation, and also launched the NEO 2.0 smart contract support system. The Neo cryptocurrency is in the TOP-50 Coinmarketcap rating and, unlike Ethereum, this project’s maximum amount of coins is limited. Its ecosystem is actively developing, the cooperation with popular blockchain startups like Bancor, Coindash and Agrello has already been established. Chinese crypto project Red Pulse has announced that it will create a financial research platform using NEO 2.0 smart contracts system. The NEO team takes part in creation of the Elastos OS, designed to explore the technological value of blockchain application in new Internet operating systems for further development of cyber economy.

The Tron (TRX) digital asset appeared in September 2017. At the time of writing this review, the market capitalization of this project has reached $1,000,000,000. Many expect the coin to take off this year. According to the most daring forecasts, 1 TRX will be equal to 1 USD, but more real will be the rise to the value of TRON coin to 0,1 USD (current rate of 1 TRX is 0,02 USD). The Tron blockchain should become a global digital content exchange system, which is in a high demand in the current environment. The Tron ecosystem gives an opportunity for gaming projects co conclude smart contracts and create decentralized applications. This platform is already used by hundreds of developers, including gaming industry leader like Bitguild, Game.com and Xu Le. The Tron company has acquired BitTorrent and signed a network agreement with Oracle and Swisscom service providers.

VectraCoin is a fast, secure and anonymous cryptocurrency developed by a UK team led by Marshall Ross. The development started in 20018, and the token sale began in October 2020.

VectraCoin combines the strengths of all major cryptocurrencies:

Vectra has the Bitcoin-like acceptance, Ethereum-like smart contracts, one-time ring signature and anonymity like Monero. And it also has the lowest transaction fees and the highest speed up to 1000 transactions per second thanks to the innovative VectraNetwork. In addition to the coin itself, the company has developed their own network and a wallet for instant transfers.

We don’t think that it’s worth saying that the coin is going to have a huge growth. At the moment, the company is selling tokens at a price of $100 for 1 token. Almost all investors expect that the $100 invested today will turn into at least $1000 by mid-2021.

It is not possible to cover all promising cryptocurrencies in just one review. In addition to the above startups, there are still some confidential cryptocurrencies that deserve attention: Zcash, Dash and Monero, as well as promising young digital coins on the MibleWimble protocol, and also a number of other altcoins. When choosing a cryptocurrency for investment, take other projects into account, no matter how attractive the chosen project is. Also, do not expect its price to double tomorrow and never panic at the first drawdown.