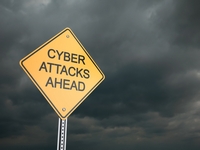 The Bitcoin cloud miner Cloudminr.io has been hacked, warns The Hacker News. Hackers are offering anyone willing to buy the users database of the miner. The price requested by the hacker for the entire database is 1 BTC. In total the database contains information about 80K users. For now the fraudsters have de-faced the main page of the miner and uploaded to public some part of information, including the usernames and passwords of 1000 clients of the service. As the experts claim, the database can become a real treasure for cyber criminals, spammers in particular.

So far it's not clear, whether bitcoin wallets have been compromised or not. However the customers of Cloudminr.io have been strictly recommended to change passwords if they are identical to the passwords used for Cloudminr accounts.

Let me also remind, several days ago Bitcoin system has suffered through serious disturbances - massive spam transaction. Fraudsters were using thousands of teeny transactions for the attack. This method is called "dust". The attackers' aim was to back up the system, making it slow or even to hack it if they succeed, at least for a while. As the result of the attack tens thousands of bitcoin transactions remained without being processed.

Apart from that this year because of hackers Bitcoin exchange Cryptoine was closed. The cyber criminal stole all online wallets of the exchange customers. As the result the exchange was forced to announce termination of trades in the nearest months. As the Cryptoine representatives report, the hacker didn't even have to hack the system in order to obtain the assets. The fraudster discovered some bug in the "trading engine", which allowed balance manipulating at his own discretion.

During last months Bitcoin resources have been suffering massive attacks from hackers. So, as the result of DDOS attack started during the first week of March 2015, several big bitcoin mining pools suffered. The victims are AntPool, BW.com, NiceHash, CKPool and GHash.io.