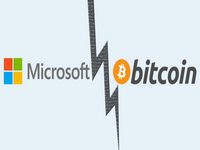 Microsoft Corporation ceases to accept payment for its products in bitcoins because of the instability of this crypto currency, as Bleeping Computer noted. According to the company's support staff, this is a temporary step. Microsoft began using bitcoin in 2014 and has temporarily stopped supporting it in the past.

Note that a similar step has been taken by Steam in early December 2017. The company representatives explained the decision to refuse payments in bitcoins with high commissions and volatility of this crypto currency. Then transactional commissions reached sky highs, increasing from a few cents to tens of dollars. As a result, bitcoin became practically unsuitable for microtransactions.

For companies like Microsoft and Steam, bitcoin volatility poses a problem, as sudden and unforeseeable price drops cause huge losses.

Microsoft does not allow users to buy products directly for bitcoins. Customers should fund the account with the amount in dollars, and then pay the equivalent in bitcoins. With this conversion, a commission is also taken, and when the bitcoin falls, the company loses huge amounts of money. Any financial department will find this situation questionable.

Now Microsoft advises clients to use other payment methods: cards, PayPal or direct transfers from bank accounts (bank wires).
Note that last week Visa broke the agreement with the issuer of debit cards WaveCrest, having canceled hundreds of thousands of prepaid cards in bitcoins issued by Bitwala, BitPay, Cryptopay and other companies.

Although the price of bitcoin has always fluctuated, in the last three months changes are particularly significant. In order for a digital or fiat currency to be widely used by the financial sector, it must be stable, and bitcoin clearly lacks this feature.