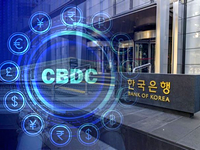 It seems that the South Korean central bank has completed the initial phases of its Central Bank Digital Currency (CBDC) as the Bank of Korea (BOK) is planning on starting the next phase which is to initiate the testing of its digital won. BOK intends to run the testing of its CBDC distribution by the year 2020.

The news has been reported by a local media outlet The Korea Herald according to which The Bank of Korea is now moving ahead towards the testing phase of its central bank digital currency known as Digital Won. In this phase which will take place in the next year, the South Korean central bank will test its digital currency’s distribution system. According to the report, this distribution testing phase of digital won will occur as part of a 22-month pilot program. This program was launched by the Bank of Korea in the month of April and it is set to run through the next year.

According to the report, this phase of the testing of circulation and distribution of digital won is the last part of its pilot program which consists of three phases in total. The first phase came to an end in the month of July in which the central bank of Korea focused on technology checking and designing. While the second phase is still continuing and it involves the outside consultation regarding the digital won project and also the analysis of some processes that are related to this project. Now, the third phase will focus on testing the distribution of digital won.

Furthermore, the Bank of Korea has said in a statement that it intends to utilize blockchain technology for tracking and managing all of the transaction details of its digital currency.