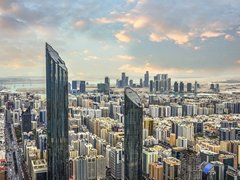 The government of Abu Dhabi, through its markets regulator, has released guidelines on virtual currencies and initial coin offerings (ICOs).

The government of Abu Dhabi has published [PDF] guidelines to bring clarity to its regulatory approach to ICOs and virtual currencies for ICO organizers and digital currency adopters. After deliberation, the Financial Services Regulatory Authority (FSRA)– Abu Dhabi's financial markets regulator – has decided that a "one size fits all" approach to virtual tokens, be it ICO tokens or digital currencies or any other implementation of blockchain solutions powered by crypto tokens, is "inappropriate".

"ICOs – Only Regulated if Seen as Securities"

"The ICO market is incredibly diverse in terms of quality, there are some ICOs which constitute high risk", said Christopher Kiew-Smith, head of fintech strategy at the FSRA. The disclosures are not there, there are no financial statements, those are extremely high risk for those seeking returns.

The FSRA underlined ICOs as "a novel and potentially more cost-effective way of raising funds for companies and projects". Altogether a decidedly contrasting approach to the likes of China and South Korea who imposed blanket bans on ICOs.

ICOs have transformed the capital formation landscape and global regulatory frameworks are evolving to adapt to such innovation. Participants exploring the issuance of ICOs that offer real value to the market and wish to operate within our regulatory framework are encouraged to engage us early to gain insights into the applicable regulatory regime.

The FSRA, which also serves as Abu Dhabi's financial watchdog, has determined that virtual currencies aren't legal tender with characteristics more common with physical commodities like precious metals and fuels, due to their inherent value.

Therefore from a regulatory perspective, virtual currencies are treated as commodities, which are not Specified Investments as defined under the FSMR. This means that a "mining" or spot transaction in virtual currencies will not constitute a Regulated Activity in itself.

Nonetheless, any regulated firms enabling or using virtual currencies for financial services will have to adhere to existing anti-money laundering/combating the financing of terrorism (AML/CFT) laws.

Bitcoin Could Still be Regulated, in the Future

The Abu Dhabi regulator has not ruled out the possibility of bringing cryptocurrencies like bitcoin under its regulatory purview. Pointing to a recent FinTech pact with its regulatory counterpart in Japan, FSRA capital markets director Wai Lum Qwok revealed that the watchdog is in discussions with Japan's Financial Services Agency (FSA) about its regulation of bitcoin. Japan recognized bitcoin as a legal method of payment in April this year. More recently, the authority issued 11 licenses for bitcoin exchanges to operate in the country.

For us, we do see a lot of challenges in regulating something which was designed not to be regulated. We recently established a fintech reach with the Japanese FSA, and through such cooperation we hope to see how they regulate these and if there are risks they see…We are open to carving virtual currencies into the regulated space.