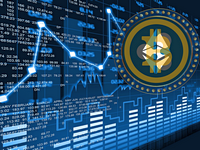 Data from ICO Analytics, a firm which analysises cryptocurrency movements, shows that web traffic on global cryptocurrency exchanges saw an average 13% uptick last month compared to the month before

ICO Analytics’ Illia Kmez said that the web traffic for centralised exchanges gained around 26% since December. Comparing the traffic from June to July, some exchanges saw a whopping 66% increase. YoBit.net and KuCoin are examples of these, and they stand amongst several exchanges to see a huge spike in traffic.

ICO Analytics also reported that decentralised finance (DeFi) firms and decentralised cryptocurrency exchanges are showing similar increases in web visits. As reported by the firm, Uniswap stands firm as the decentralised exchange with the highest web traffic in July, with more than 1.4 million visits.

While DeFi markets don’t make up a massive portion in the cryptocurrency industry, the positive sentiment seems to be interlinked. Bitcoin, Ethereum, and Ripple are all maintaining new record support values for 2020. Decentralised tokens, such as Chainlink, on the other hand, are also enjoying the increased – and maintained -value since a spike in July.