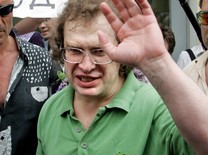 By Nicole Berger
MMM as the largest Russian financial pyramid. Founded in 90s it has become the most powerful offline pyramid on post soviet community
Sponsored Links
In this article I tell about MMM - the largest pyramid scheme in Russia in the 1990s. According to official statistics, this pyramid cheated with at least two million people and collected more than 1.5 billion U.S. dollars.

In 1989 Sergey Mavrodi, his brother Vyacheslav Mavrodi and Marina Muravieva, Vyacheslav's future wife, established MMM in Russia. The name of the company was an abbreviation of the three founders' surnames.

At the very beginning, the company had another of business, namely import of computers and office equipment. However, MMM company got serious financial problems with tax police in January 1992. First, the company tried to offer American stocks to invest in their project but had no success. Later, MMM invest was created for collecting vouchers during privatization but Mavrodi and Co had little success too.

The breakthrough of MMM company started in mid-1993. The company started attracting money from private investors promising high annual returns of one thousand percent. So the Russian largest financial pyramid was born! The company grew rapidly and had enormous success. What secret of success they had?

In February 1994, MMM promised interests of 1,000% and began an aggressive but talented advertising campaign. In their advertisements on TV and radio the Mavrodis made people believe that investments in MMM were a safe and profitable.

There is no doubt that most of the company's success came from extremely aggressive TV advertising campaign, appealing to the general public by using â€œordinaryâ€ characters viewers could identify with. It was a very smart marketing method to influence people. Another notable marketing effort was the giving away of free Metro trips to all Moscow citizens during one day.

Furthermore, this company was one of the first well-known companies in Russia with a logotype and slogans (â€œFlying from shadow to the lightâ€ and others). At that such marketing and advertising strategies were new in Russia and attracted attention of millions of people. As a result, the company earned more than 20 billion rubles (about 11 million USD) each. According to official data, between two and five million people â€œinvestedâ€ in this genial scam!

After enormous â€œsuccessâ€ of MMM company many other similar companies like Tibet, Chara, Selenga, Telemarket, and Germes were established in Russia. All of these companies used prosperous marketing strategies of MMM such as aggressive television advertisement campaigns and extremely high promised interests (one company promised annual returns of 30,000 %!).

But the time of MMM success was short. On July 22 1994, the police closed the offices of MMM for tax evasion. However, the company made a weak and unsuccessful attempt to attract further investments and start selling bonds instead of shares, but people got panic and stopped all the operations. At this point, MMM company owed 50 million to 1.5 billion dollars. In the aftermath at least 50 investors, having lost all their money, committed suicide.

Owed â€œinvestorsâ€ formed some organizations to try to return their money. However, the MMM founder Sergey Mavrodi manipulated their indignation and directed it at the government. Sergey Mavrodi was arrested for tax evasion in August 1994, but soon he was elected to Russian State Duma.

Moreover, he claimed that the Russian government was responsible for investors losing their money and promising to start a pay-back program. However, it was again a scam and just several investors could get money back. In October 1995, Sergey Mavrodi lost his right to immunity as a deputy. MMM company declared bankruptcy on September 22, 1997.

After that event there was an opinion that Sergey Mavrodi left Russia and moved to the United States. But some people say that it is most likely that Sergey Mavrodi actually stayed in Moscow, using his money to change apartments regularly and employ a group of former special agents.

He started Stock Generation Ltd., another financial pyramid based around trading non-existent companies' stocks on the company's site, stockgeneration.com. Though there was a bold-letter warning on the main page that the site was a scam, about 275,000 people fell for the promised 200% returns and lost their investments.

According to U.S. Securities and Exchange Commission, losses of victims were at least USD 5.5 million. Mavrodi was found and arrested in 2003. As of 2005, he remains in custody and is given time until January 31, 2006 to read the documents in his case on financial fraud (the criminal case consists of 650 volumes, each 250-270 pages long). He is being prosecuted for fraud committed in extra large size or in an organized group, and for tax evasion.

In the meantime, his brother Vyacheslav Mavrodi and his wife Marina Muravieva started a new company MMM-96, a smaller and more legal pyramid scheme, but Mavrodi was arrested in 1998.

When the Russian government executed its own GKO pyramid scheme starting in 1995, which culminated in the collapse of 1998 and the government's default, Sergey Mavrodi published a warning about its imminent collapse three months in advance on the Internet.

The MMM scandal led to increasing regulation of the stock market, although it was arguably too late, as most people became extremely suspicious of any joint stock companies.

In the conclusion, I'd like to say that the founders of MMM company impressed the readers the giant size of the project, the sum of all investments and real genial idea of marketing of a financial pyramids. Not each company can influence on so many people's consciousness and earn enormous money. I am sure that MMM stays as the largest financial pyramid and greatest scam in Russia of all times.