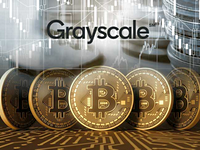 Grayscale Bitcoin Trust Fund (GBTC), a cryptocurrency management fund, has slowed down significantly on buying Bitcoin over the past three weeks. This comes as a surprise, considering how rapidly it was increasing its cryptocurrency holdings before the Bitcoin halving. In May, the firm tweeted that its assets under management (AUM) hit $3.8 billion USD in value – a monumental 80% increase from May 2019.

In May, GBTC’s Bitcoin trust accounted for nearly 90% of the firm’s totals assets with over $3.36 billion USD. The value of the Bitcoin investment trust saw a 76% increase from last year at $1.9 billion USD. Despite the explosion in investment, the firm’s trend in buying digital assets slowed to a crawl, without any hint of picking up again.

Historically, before the pause in Bitcoin investment, GBTC has been filing a Form 8-K with the Securities and Exchange Commission (SEC) on a weekly basis. However, the last form was reported on June 25th, and nothing has been declared since. The firm’s last investment shows a purchase of nearly 20,000 Bitcoin (which translates to over $187 million USD at the time of writing). According to its second-quarter report, the firm’s investments were pulling in approximately $57.8 million USD on a weekly basis.

Why Is GBTC Halting Investment?

A Grayscale spokesperson say , and suggested that the suspension of Bitcoin purchases is not a permanent fixture. Rather, the downshift in investment is temporary as a result of a quiet period. The spokesperson stated:

“There was an administrative quiet period for the Grayscale Bitcoin Trust private placement. The Trust is now open for subscription as of Friday, July 10 at 4:00pm ET.”

Grayscale Is Strong Indicator Of Institutional Interest In Bitcoin

It’s worthwhile pointing out that the investment firm is not a hedge fund, betting on the future value of an asset. Instead, the company buys Bitcoin when investors buy shares. This means that when GBTC’s interest in Bitcoin increases, it correlates with its institutional investors’ interest in buying shares linked to Bitcoin.

In the second quarter, a whopping 84% of the investments into Grayscale were resultant from institutional investors. The company commented on the fact that it was buying more Bitcoin than was being mined at the time:

Despite this, the recent halt in investing in Bitcoin is an indication of the current interest coming from institutional investors.

There a number of different factors which could result in the sudden decline of Bitcoin investment from institutions.

The time of year for one, is usually a dry period in investment, as asset managers slow down during the mid-year season. Another factor to bear in mind is the uncertainty of the economy and assets resultant from the global pandemic. While Bitcoin has been considered a modern safe-haven asset, it might not be the alternative opportunity that institutional investors are looking for under the circumstances.

Over the past few months Bitcoin, usually famous for its volatile rollercoaster movements, has been fairly stable in its value. This also might be detracting attention away from the investors who are looking for a high-risk high-reward asset.