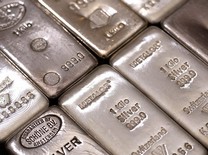 By Lella Prior
Encyclopedia investor. Prospects for investment in silver. Educational and interesting facts about noble metals.
Sponsored Links
We go on our series about noble metals and today we'll tell You about silver. Of course, silver is not such popular as gold, we told You about in our e-zine #7, though it's not less important. At the same time it`s important not for the investor, but for everyday life as well. Silver, just like gold has unique features! Do You know that silver is found in any piece of clay for example? There You are! Enjoy Your reading...

Comparing with finding gold and its contact with people, silver has started to be used much later. Both legends and archaeological finds testify that. The most ancient silver manufacture - small beads-insertions were found by the archaeologists in cultural layers, accumulated in Sub-Mediterranean about 4 thousand years ago. It's widely known that silver was mined from of old in Egypt, Ancient Greece and Iberia. By the way, silver, was also worshipped by people, despite it's not as "sunny" as gold. If Gold embodied the Sun for ancient ancestor, then silver embodied the Moon. However, silver manufactures were found not so often as gold ones by the archaeologists.

It's probably connected with the fact that silver, being located in the ground, can change to some unstable chlorides and even dissolve. As we remember, gold is much more stable to changes and that's why it's used as the most reliable means to keep valuables. Silver - light grey metal, very heavy (it's density is 10,49 g/sm3), exclusively plastic (1 kg can be stretched out to a wire 2 km. Long and more), it's good to be polished, doesn't practically oxidize in the air, the melting temperature is 960,5 --, so, You can hardly melt Your rings at home. Silver has the highest conductivity and thermal conductivity among all the metals and that's why it's widely used in electric industry. It generates alloys with many heavy metals, for example, with mercury - amalgam, which also have their specific, especially valuable features.

Silver as a rule is mined at the same time with mining gold, lead-zinc, copper, nickel, antimonial, cobaltic and uranic ores (for instance in capitalistic countries, about 50% of silver is mined from lead-zinc ores, 18% - from copper ones, 12% - from gold ones and only 20% - from silver ores directly.) The minimum content of the metal in the silver fields reaches 0,04- 0,05 (or 400-500 g/t).

This "scattered nature" of silver, as well as less notable color determined its later revelation by people. from this its original more rarity and more value of silver. But then, the second discovery of silver took place...

Refining gold with molten lead, sometimes the metal more tarnished than original gold was discovered. But there was more of it, than initial metal before refining. This pale gold entered everyday life from the 3rd millennium B.C. Greeks called it electron, Romans - electrum, and Egyptians - asem. These gold-silver alloys for a long time were considered some peculiar metal and only later it became clear that silver in alloy with gold gives it the features unexampled before and in itself becomes more interested for people.

In Ancient Egypt, where the Gold was brought from Syria, it served for producing furnishings and coinage. This metal was brought to Europe much later (approximately 1000 years B.C.) and was used for the same purposes. The bright silver glance reminds of the Moon brilliance - during the alchemic period of chemistry development silver was associated with the Moon and marked by the Moon sign. It was presumed that silver is a result of metal transformation on the way of their "transmutation" to gold.

High silver plasticity favoured appearance of the applied art, dealing with art processing of the metal that delivered appearance, life style and ethnography of people, used to live in the previous millenniums to us.

Silver, just like gold, has been used from of old as money. Who else can know about that better than You, investors. And again, that's because of its value. The first silver coins in the world appeared several centuries B.C. For example, we know of ancient Roman dinars, emitted as far back as in the year 269 B.C. (half century earlier than gold ones); Silver has been monetary long since in China, Afghanistan, Iran, and Ethiopia. In the year of 1985, 465 tones of silver were used for coinage in the capitalist world.

In the year of 1528 in Bohemia, silver thalers were emitted; afterwards they spread all around other European countries.
However, money is not the only sphere of applying this noble metal. Today silver "professions" are extremely different.

Approximately about 1/5th of the silver, mined in the world is applied in electronics (to produce conductors for extremely precision instruments, to produce critical electrocontacts, silver-plated wire for high-frequency electrical engineering), in atomic industry (neutron radiation indicators). The silver-cadmium, silver-palladium, silver-cadmium oxide alloys are used. Silver is also needed in photochemical (to produce light-sensitive emulsion for cine- and photomaterials) and pulp and paper industries, in aviation, rocket production, military science, chemical industry. It's also used for soldering metals, in dental practice, medicine (as a strong antiseptic).

For a long period of time silver was used for producing crockery, which disinfected water and food. The thing is that water in the silver crockery is a weak colloidal silver liquid and has a strong bactericidal effect ("holy water" effect). Silver kills pathogenic and putrefactive bacteria, as well as it sterilize water even in the quantity of billion parts of gram per litre. Eat from the silver crockery, ladies and gentlemen! :)

Today the principle of water "silvering" is used in ionizers; the water is silvered on seagoing crafts, during long voyages, for instance, in desert, in space. Other silver compounds are used in medicine: silver nitrate, protargol, protargentum, argin, losargentum, argyrols, collargol. Silver is used for mirror production. Centuries ago silvers looked like sliver polished plates, and as soon as glass was made, tin amalgam was used as a reflector for some time at first, then people learnt to apply a thin layer of silver to glass. Silver is also added to the metal strings of musical instruments.

It's interesting that secondary silver smelting in the same countries the same year was (in thousand tones) about 3.5, including silver scrap 2.5, coins' remelting - 0.15 and state reserves 0.3. The price on gold on the world exchanges for the period from 1981 - 1985 was fluctuating from 0.20 to 0.34 USD for 1t. Silver mining in the world has almost exceeded 800 thousand tones for 500 years, more than 650 thousand tones of which (more than 80%) mined on American continents.

Next time we'll tell You about platinum and a little bit of some other noble metals.
Thanks for Your attention.